Two retirements at the end of this school year at Bethel College leave a large and visible legacy on the north end of campus in the form of Thresher Stadium. 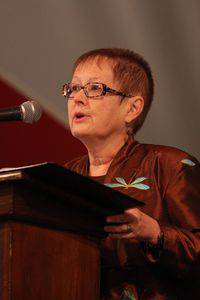 Sondra Koontz speaks at the James A. Will Family Academic Center Dedication in October 2012. Photo by Vada Snider.

As vice president for advancement, Sondra Bandy Koontz’s ’70 work over almost 15 years has frequently taken tangible shape. Diane Flickner, after 35 years of coaching, teaching and administration (she was athletic director, 1990-2011), may leave subtler, but no less important, signs behind.

Each one, at farewell receptions given at the end of the year, listed as a highlight of their tenure serving with each other on the design team for Thresher Stadium, completed in 2005 during the presidency of E. LaVerne Epp ’72.

What fun we had together, she says. My respect for each one of them is enormous – incredibly knowledgeable, hard-working, get-it-done folks.

Flickner also remembers many good times, laughing and hard, hard work characterizing the work on the stadium. The task, she says, was to decide what was good for Bethel College, that would leave the best legacy.

Koontz was happily employed as a department head at the Wichita Public Library when one day in 1998, the first of five Bethel presidents she would go on to work with, Doug Penner ’69, called to ask if he could meet her for lunch.

When he asked her to take the advancement position, she was a little unsure – to put it mildly – that she was up to the job. Doug looked at me and asked, Do you love Bethel? I assured him I did. Well, then, you can do this, he told me. It took a couple more lunches but Doug did convince me.

The $16 million Koontz learned, on her first day in the job, that her office needed to raise soon turned into $19 million and then $23 million. During the Penner administration, Koontz worked on the Leisy Admissions and Welcome Center, Voth Hall (residence hall) and Krehbiel Science Center campaigns.

When Epp began his tenure, one of the first things he did was interview Koontz, obviously trying to judge my potential, she says. He was looking at the Bethel College Fund Goal. I don’t see how you can possibly raise this much money, he said. We can’t, I said. Well, what are we going to do? he panicked. Someone has to die, I said calmly.

His eyes widened, and he said What? Well, I said, leaning across the table, we don’t actually kill them, you know. This became a joke between us and among my staff. Development officers, I assure you, have very dark humor.

But it doesn’t mean we don’t love our donors. We do. Our close relationships with them give meaning to our jobs and to our lives. Building confidential, respectful and even loving relationships is what it’s all about.

We finally built the Academic Center – raising funds for that building and the [Ward Tennis Center] at the same time, truly an amazing feat.

She also led the Will Family Academic Center design team. Because I wanted so long to do this building, in many ways it feels like it belongs to me, she says.

It feels like a good time to leave, when everything is in good hands – president, cabinet, advancement staff.  I have had a wonderful 15 years at Bethel.

While Koontz is a Bethel graduate, Diane Sanders had never heard of Bethel College when a friend told her 35 years ago that there was an opening for a volleyball coach.

After beginning her teaching and coaching career at Buhler High School, Flickner (who married Dennis Flickner ’77, longtime Newton High School teacher who also retired this year) came to Bethel in 1978, where her Thresher volleyball teams compiled a 400-147 overall record and a 169-21 KCAC record during her 11 years as coach.

During that time, they won eight of 11 KCAC Championships. Flickner’s 1981 Bethel team was one of the best ever to compete for the Threshers, winning the 1981 KCAC Championship with a 16-0 conference record, earning national recognition as a Top 10 team in overall Division II rankings, winning the NAIA District 10 Tournament and placing third at the NAIA National Volleyball Tournament in Athens, W.Va.

After she became athletic director at Bethel in 1990, Flickner was honored numerous times as NAIA District 10 and KCAC Athletic Director of the Year. She was instrumental in developing and implementing Bethel’s Champions of Character program for student-athletes.

Being a non-Mennonite at a Mennonite college in 1978, Flickner recalls, she felt a bit like the proverbial fish out of water. But she adds without hesitation that she stayed so long because Bethel is worth it, for many reasons.

Chief among these, she says, are the people she worked with over the years – from the Thresher Stadium design committee to the various coaches, from her colleagues in the health and physical education and athletic training departments and Faculty Welfare Committee to maintenance, administrative office and development staff (I can’t say enough about those who work behind the scenes).

So many of those I worked with are gone [from Bethel] now, Flickner says. That’s what happens when you’ve been here so long. Brad [Born] and also John Sheriff were so helpful with advice and guidance on letting go when it’s time.

In addition to people, Flickner says she’ll remember a joy of working here being doing more with less and being creative. The fun things, like breaking Guinness world records and Booster Club activities.

And finally, being a Thresher and being committed to Bethel College. I’ve had the best time of my life.

As younger faculty come through at this time of year, interviewing for open positions, says White, I think of … how rare it is to have 35 years at one institution. There are a lot of places [she] could have gone – to a bigger city or more money – but [she] gave her life to students at Bethel College.

The impact of all those lives touched is awe-inspiring. Few people leave that kind of legacy.

Flickner will be back for this year’s Fall Festival and the planned celebration of 40 years of volleyball excellence at Bethel.