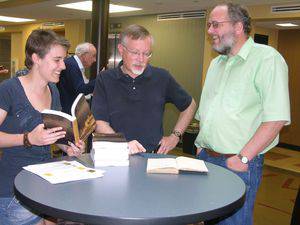 From left, Audra Miller, John Thiesen and Mark Jantzen at the book celebration for The Military Service Exemption of the Mennonites of Provincial Prussia. Photo by Melanie Zuercher

First is that The Military Service Exemption of the Mennonites of Provincial Prussia by Wilhelm Mannhardt, edited and annotated by Mark Jantzen ’85, professor of history, and John D. Thiesen ’82, co-director of libraries and archivist at the Mennonite Library and Archives, came out in the 150th anniversary year of its original publication, in German.

The book marks Thiesen’s 20th year as editor for the Wedel series. It represents one of the last major projects for translator Anthony (Tony) Epp ’63, who died in 2011, as well as the first-ever book design for Bethel senior Audra Miller ’14, a communication arts and graphic design major. It is scheduled to be the first Wedel Series e-book, though that format is not yet available.

In the mid-19th century, the Mennonites in the Vistula Delta region – what is now northern Poland – saw their historic exemption from military service coming under siege in both the church and the wider society. Mennonite leaders commissioned Wilhelm Mannhardt, the first German Mennonite to earn a Ph.D., to research and write an extended explanation of the Mennonite peace position. 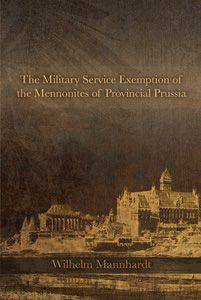 Mannhardt argued that refusal to serve in the military was based on religious conviction with a history going back to the 16th century. The target audience in 1863, when the book was first published, was Prussian government officials and legislators along with public opinion leaders.

The book also became a resource for the debate going on within the Mennonite church in Europe about if and how to adapt Mennonite identity to the contemporary world.

In an extended essay published several years after he wrote the Prussian Mennonites’ apologetic, Mannhardt argued that the Mennonite exemption from military service, while an authentic part of the Mennonite past, was no longer relevant and that Mennonites should now accept some form of patriotic service.

That essay, translated by Abraham Friesen, is also included in The Military Service Exemption of the Mennonites of Provincial Prussia.

There are also several maps and illustrations (the original version had neither).

Mannhardt’s book was the first, and for many decades the only, history of the Vistula Mennonites, who were one of the largest regional Mennonite groups from the 16th to the 20th centuries, the editors write, and the source of the more widely known Russian Mennonite experience.

His work is foundational for European Mennonite historiography and this English translation makes it available, after 150 years, to a much wider reading audience.

At a book launch held at Bethel May 16, Brad Born ’84, vice president for academic affairs, noted that the tension between the traditional Mennonite resistance to nationalism and the state’s desire to foster overt loyalty in citizens remain ongoing.

The preface to The Military Service Exemption, he pointed out, opens with a story from a little over a decade ago, when Bethel’s sister Mennonite institution down the road, Hesston College, became the subject of controversy over its historic refusal to fly the United States flag.

At issue was whether or not Hesston would be denied state grant money because of that refusal. An interesting twist in the story was that the Kansas state budget director at the time was a Mennonite, Duane Goossen ’78.

When the issue was finally settled and Goossen was asked to comment on what had been learned, he said that it would be important, if any similar situations arose in the future, to help legislators understand that there was a lot of thought and a long decision to the decision [Hesston College] made on their campus about [not] flying the flag.

The Military Service Exemption of the Mennonites in Provincial Prussia is available at Thresher Bookstore in Schultz Student Center and at the Kauffman Museum gift shop. The price is $20 (U.S. or Cdn.) for each volume (plus $4 shipping if mailed). Order by e-mail at mla@bethelks.edu or by mail at Wedel Series, c/o Mennonite Library & Archives, Bethel College, 300 East 27th Street, North Newton, KS 67117.

The Mennonite Library and Archives initiated the Wedel Historical Series as part of Bethel College’s centennial celebration in 1987. Cornelius H. Wedel, the first president of Bethel College from the beginning of classes in 1893 until his death in 1910, was an early scholar of Mennonite studies.