In mid-December, Mathis completed his sixth season as an assistant coach (defense) for the Marian University (Indianapolis) football team.

It was an extended season because, on Dec. 13, the Knights played in the NAIA championship game – and they won, defeating Morningside College (Sioux City, Iowa) in overtime. 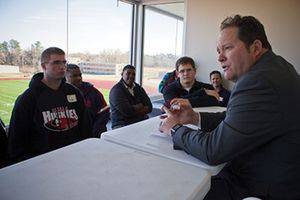 Dec. 18 was a football visit day at Bethel. Mathis, two of his assistants, 10 prospective football student-athletes and their parents spent time together getting acquainted with each other and Bethel athletic and other facilities.

They met in the press box in Thresher Stadium, overlooking Joe W. Goering Field (above), where Mathis shared some of his vision for the Bethel football program.

On Feb. 6, Mathis and recruitment coordinator Chi-Emeke Worthington announced the signing of 25 players for the 2013 season.