As he’s been working at bridging cultures at Bethel College, Caleb Lázaro has found one of the most effective tools to be salsa dancing. 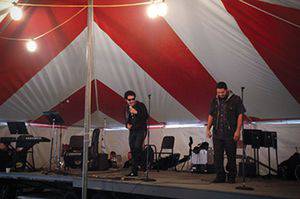 Lázaro is in his second semester as Multicultural Student Union adviser at Bethel – not a new position, but a greatly expanded one.

I came into a program that had been largely focused on fellowship, Lázaro says. We’re now trying to get at it from more angles – trying to find diverse ways of engaging marginalized populations on campus.

By marginalized populations, he says, he means students from other cultures, particularly inner-city or large-city, unfamiliar with the dominant culture – which is white and rural/small-town. They are often underrepresented here because of how they communicate, the music they listen to, a very different worldview.

The Multicultural Student Union is a safe place to voice some of that.

Though the formal MSU group that meets monthly is not large – 9-10 at most – one of their goals is to engage all cultures on campus, Lázaro says. To that end, they planned several events during the fall, including the salsa dancing, when Lázaro’s sisters, Daniela and Myriam, came from Colorado Springs one weekend in September to lead dance instruction.

About 60 students showed up for salsa, cumbia, merengue, bachata (a traditional dance from the Dominican Republic) and open dancing with recorded music.

The public event for October was a mini-concert at Fall Festival, with a half-dozen students performing in their preferred styles, ranging from gospel to hip-hop to slam poetry.

In January, MSU members prepared a flash mob-style recitation of excerpts from Martin Luther King Jr.’s I have a dream speech that served as the opening of the Jan. 21 MLK Day celebration at Bethel. On Feb. 8, MSU hosted another salsa dancing night in Memorial Hall.

Engaging with the musical culture that comes from being in an urban context has been important to us in the MSU, he says.

He set up a recording studio in a spare room in his campus apartment – all that was required was a condenser microphone, computer and audio interface.

Last fall, Travon Lewis, junior from Houston, as YV Triple-Ks, made a club hip-hop recording, Thresher Zone, that Lázaro shared across campus through e-mail and Facebook to encourage support for the football team.

Most of my day-to-day work as multicultural adviser involves being intentional about building relationships – with students of color in particular and all students in general, Lázaro says. [My wife] Mai and I are having people over to the apartment all the time to record or to have supper.

Lázaro also eats one meal a day in the cafeteria during the week in order to get to know more students and find out what’s important to them.

It’s been a challenge to reach out to them creatively, to bring them all to the table, to be a part of the fellowship experience. But there’s a growing sense of solidarity [among] the students who’ve been involved in MSU programming and leadership.

Caleb knows and gets along with students well, says Gonzalez. He knows what we want, partly because he’s a student, too. Lázaro, who has an associate degree, is studying for his bachelor’s degree at Bethel.

He has a lot of new ideas and is willing to try new things, Gonzalez continues. We did a lot more events [as MSU] last semester and they went really well. People seemed to like them.

Lázaro has been helping Gonzalez and Brown transition into our roles, which involve thinking of activities and then coordinating them, doing publicity, getting people to participate, she says.

We’re very excited about our new presidents, Lázaro says. We felt it was important to have two leaders representing two different communities.

Both Lázaro and his boss, Vice President of Student Life Aaron Austin, are looking ahead to an even broader role for the multicultural student adviser.

Lázaro notes that another challenge [has been] realizing how much Bethel focuses on race issues as being our biggest social justice concern on campus, when really there’s so much more. As someone who’s committed to discussing race issues openly, I’m also very aware that there are gender issues, sexual identity issues, homophobia issues that need to be discussed.

After informally advocating for those voices to be heard, Lázaro will be exploring how to do that more deliberately in the future.

He’s already excited about FemCore, a Bethel student feminist collective that organized last fall. FemCore sponsored a showing of the documentary Miss Representation, about how the American mass media portrays women, on campus at the end of fall semester, as well as an event on March 8, International Women’s Day.

I hope to see us at Bethel moving away from the one-issue mentality, toward understanding other issues of systemic violence, Lázaro says. So one of my challenges is how to help make room for some of those other conversations.

As well as for more dancing – both on campus and in Phoenix at the Mennonite Church USA convention in July. One of Bethel’s gifts to that event will be Caleb and Daniela Lázaro giving salsa dancing instruction to anyone interested.