Lytle tells listeners: Speak out, or be part of the problem

While Martin Luther King Jr. “left volumes and volumes of written material,” Rosemary Harris Lytle told her Bethel College audience, she had come “all the way from Colorado Springs” to talk about just seven of his words. 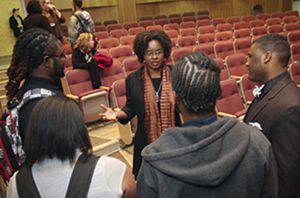 From King’s famous letter written in April 1963 from Birmingham City Jail, those words were: the appalling silence of the good people.

Lytle, president of the NAACP for Colorado, Montana and Wyoming, was the keynote speaker for Bethel’s annual celebration of the King holiday, on Jan. 21 this year.

King wrote his open letter in response to one he had just received from eight members of the Alabama clergy, in which they called nonviolent action for civil rights – for which King had been jailed – unwise and untimely.

King’s response to the implied request to Wait, Lytle said, was to note that this Wait has almost always meant Never. Justice delayed is justice denied.

She continued, quoting from Letter from Birmingham City Jail, Oppressed people cannot remain oppressed forever. The yearning for freedom eventually manifests itself, and that is what has happened to the American Negro. Something within him has reminded him of his birthright of freedom, and something without him has reminded him that it can be gained.

Lytle noted that, on the evening of Jan. 21, 2013, we are standing on this moment of history – the day of the second inauguration of the United States’ first black president, in the year that will see the 150th anniversary of Abraham Lincoln’s signing the Emancipation Proclamation and the 50th anniversary, in August, of the March on Washington for Jobs and Freedom.

I’m thankful that Martin Luther King was here at Bethel [Jan. 21, 1960] – the splendor of history right on this campus, Lytle said. But I’m most thankful for what King did 50 years ago [in April], when he allowed himself to be arrested. He could have gone off and taught at Harvard or Yale. He could have gone to another country and been a dignitary. Instead he allowed himself to be arrested and he started a movement.

We have to speak out in this country, she said, or we’re part of the problem.

Bethel’s Martin Luther King celebration also included contributions from students, who started the program with a flash mob-style recitation of excerpts from King’s I have a dream speech and who sang and led the audience in singing Hezekiah Walker’s I need you to survive.

Kevin Coash, senior from El Dorado, won the annual student poetry contest held the week before the King Day celebration. He read an original poem, as yet untitled, he said, along with Small Comment by Sonia Sanchez and Caged Bird by Maya Angelou.

The next day, Lytle led a seminar – which drew enough interest that it had to be moved from its original classroom venue to Krehbiel Auditorium – on Uncovering the New Jim Crow: Mass Incarceration in the U.S.

Drawing heavily on Michelle Alexander’s 2010 book The New Jim Crow: Mass Incarceration in the Age of Colorblindness, Lytle pointed out that slavery, Jim Crow and mass incarceration are all tied together.

Jim Crow refers to a set of strictly followed rules that whites imposed on African Americans in the South, from soon after the end of the Civil War until civil rights legislation in the latter part of the 20th century legally overturned them.

Yet even with Jim Crow laws off the books for decades, Lytle noted that in most of the United States, convicted felons are denied the right to vote as well as being discriminated against in employment, housing, education and public benefits.

This is done by way of systems set up in this supposedly colorblind country. First there was slavery, then Jim Crow, now incarceration.

Young black men are imprisoned at anywhere from a 20 to 50 percent higher rate than whites, Lytle said. Criminality has always been used to stigmatize black men in this country.

Lytle expressed hope that learning about what she called a new civil movement would serve as a call to action.

I encourage you not to be discouraged, she said. Use what you have – education, training, perhaps employment, privilege – for good.

One African-American student noted that a common question from his white peers when there are issues raised about diversity and privilege is Do you want me to feel sorry? My answer is No, I want you to understand, he said.

That’s a good comment, a good question, Lytle said. I feel sorry about what happened. But I don’t want you to feel so bad you’re paralyzed.

As the good people, we have to speak out. I want you to want to join me in this work. Even if it’s something you do on this campus. Even if it’s just the example of friendship. It shouldn’t be only about [rights for] blacks, or for gays and lesbians, or for women, or for Hispanics, or for immigrants. I want you to join my hand in friendship and then let’s do this together.