The Class of 2014 may be among the rare few who actually remember the commencement address. 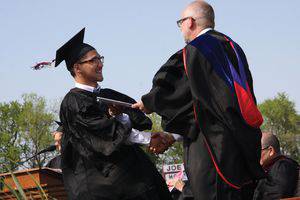 That’s for at least two reasons—it may have been the shortest ever (clocking in at about 7½ minutes) and it was all in rhyme.

Commencement speaker Dale Schrag ’69, who retired at the end of June after 30 years at Bethel, most recently as campus pastor and director of church relations, is known to the campus community for many things.

One that the Concert Choir looks forward to almost every year is a recap of the spring break choir tour done completely in rhyme. Schrag decided to do the same with his commencement address, Always be a Thresher.

Brad Born ’84, vice president for academic affairs, introduced the Class of 2014 by citing a number of its characteristics, including the fact that 83 of the 105 graduates are from Kansas—along with one from Mexico, one from Peru by way of Colorado, and one from Brazil by way of Kansas. At least seven are following a long-standing Bethel tradition of taking voluntary service assignments starting within the next several months. 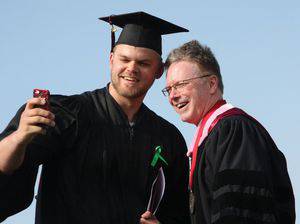 Trever Ford takes a selfie with the president. Photo by Vada Snider.

At the baccalaureate service earlier in the day, three graduating seniors and one parent reflected on the impact Bethel College had on them. Rosa Barrera, administrative assistant to the Bethel president, has worked at the college all four years her son Danny was a student. They each gave their perspectives on being at Bethel with the other, on Danny’s move to the residence halls after his freshman year, on the opportunities he had because of the move, and on the future.

Parents, Rosa Barrera said, it is time for us to turn the wheel over to our fine, educated young daughters and sons, because the world awaits them.

Graduates, when in doubt and confusion about your purpose, may God light your way and give you peace in his plan for you. May … the gifts you have received in your studies … become a source of inspiration and blessing for the world.