Alumni Come Back To Bethel For First Stand-Alone Reunion Weekend

Alumni joked, laughed and listened intently to stories of experiences from their schooldays at Bethel—such as the one about live poultry left under a lectern for an instructor to find.

The occasion was a class taught by John Sheriff, Ernest E. Leisy Professor Emeritus of English. The class, held in the Will Academic Center (which most alumni knew as Science Hall), was part of Alumni Weekend June 6-8, which featured a variety of back-to-Bethel experiences for former students.

Sheriff’s class encouraged alumni to give personal narratives. Another back to class opportunity was Bethel Through the Lens: 10 Years of Calendar Creations, with instructor Bob Regier ’52, professor emeritus of art.

Those two learning sessions were attended beyond our wildest dreams, said Dave Linscheid ’75, director of alumni relations. They were an incredible hit.

A total of 58 came to Sheriff’s class, while 74 packed in for Regier’s presentation. 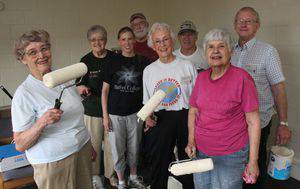 The rest of the weekend seemed to be a hit as well, as more than 200 people participated in some way. That number included 15 Alumni Council members who volunteered for setup, decorating, flower arranging, scooping ice cream, ushering, greeting, driving a golf cart for transportation and hosting.

The weekend’s other back-to opportunities included back in the dorm, with some alumni staying June 6-7 in Voth Hall; back to serve by painting Mod 3C the color Jordan Almond, used for many years at Bethel; back at Goerz Hall (now Goerz House, the president’s home) for an ice cream social; and back in choir to rehearse and then sing for the Sunday morning chapel service.

This was the first time Alumni Weekend has been a stand-alone event. In years past, it was held in conjunction with Commencement Weekend.

I don’t think it’s been at Bethel like this before, Linscheid said, at least not since he became director of alumni relations in April 2000.

One reason for the change was because some younger reunion classes want to have their special gatherings during Fall Festival. The 40th and 45th reunion classes will now meet during that annual event.

But I think the older classes still welcome a time that’s separate from Fall Fest, Linscheid said. [It’s] not as overwhelming as Fall Fest might be—spending time and visiting together. This offered an opportunity to do something special for the golden anniversary class from now on.

The 50th-anniversary class had a special photo taken on the steps of the Administration Building and were recognized during the banquet as they marched into Memorial Hall.

The oldest person in attendance was Robert Kreider of North Newton, who was celebrating his 75th anniversary of graduation in 1939.

People came from as far away as Canada and Sweden and as close as two blocks, Linscheid said. Alumni from non-celebratory years attended as well.

The 1967 European Tour Choir had a reunion during the weekend. They had a blast, too, Linscheid said.

Alumni Weekend at its own time allowed the college to have the Heritage Roll of Honor service then instead of by itself in April. HROH was part of the Sunday morning worship service in the chapel (see page 23).

Alumni were able to do service work in a residence hall, as students had left for the summer. The Alumni Banquet honoring award recipients was at noon followed by a dessert reception where alumni could meet with awardees and retired faculty and staff.

Rather than cramming things into a Friday evening and Saturday, we had from Friday noon until Sunday noon, Linscheid said, so there were lots of opportunities for interaction and engagement in various ways in various settings.

Another bonus, Linscheid said, was that Commencement Weekend this year focused only on graduates and their families with a Friday night party just for graduates, and a Saturday luncheon and evening ice cream social for graduating seniors and families.

The feedback suggested [alumni, graduates and families] were really pleased with the new way of doing things, Linscheid said. Everybody was happy with the change.

One alumna who attended agreed.

I think there was more time to relate to or catch up with our friends, said Shirley Goering, Class of 1957. It was really very nice.

Goering said people usually are so rushed during Commencement Weekend that they don’t have as much time to be with friends they haven’t seen for a long time.

Another change was that the three reunion classes were invited to contribute to Bethel’s general fund. All together, they gave more than $100,000 in observance of their reunions.

We were pleased with the [total attendance], considering seniors, their family members and two reunion classes no longer participated in the weekend, Linscheid said. My guess is the numbers were much the same [as in the past], but we have hopes that the new version of Alumni Weekend will catch on, and they’ll increase in the future.