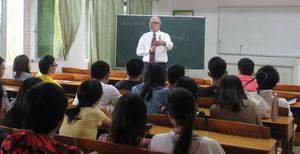 The next step in the ongoing China Studies Initiative took place in March, when Brad Born ’84, vice president for academic affairs, went to Guangzhou, China, to the campus of Zengcheng College of South China Normal University, to sign an agreement to foster an exchange between Zengcheng and Bethel.

The agreement sets the terms for accepting up to 6-8 students a year to study for one semester at Bethel, Born said. It could start with the 2014-15 school year, depending on how quickly Zengcheng College is able to find interested students.

The agreement is with Zengcheng’s International College, where all 1,000 students study a foreign language. The benefit for them in coming to Bethel, Born said, is to improve both their English and their cultural experience with the United States—seen as helping students toward better future opportunities, whether studying or working in China or elsewhere.

Bethel President Perry D. White said, We believe our students and college community will benefit from such an exchange and opportunity to engage with members of [Zengcheng College].

She was the connection to Professor Huang Xiaoqun, now executive vice-dean of the International College, who previously directed the Confucius Institute at the University of Kansas.

Professor Huang’s letter of invitation enabled Born to get his travel documents for the initial contact with Zengcheng last summer and for his return to sign the agreement with Zengcheng College President Yang Wenxuan March 28.

The exchange agreement is just the latest in a series of actions at Bethel as part of the China Studies Initiative that began in 2010 as the result of a gift from major donors Jim ’57 and Shirley Goering ’57 of North Newton.

These actions have included an interterm study trip to China, the establishment of Chinese-language study (Chinese I and II) and special recruiting efforts aimed at Chinese students at Mennonite high schools.