Bethel’s C. Henry Smith Peace Oration contest took place April 23–25, with contestants speaking before their peers in convocation as well as for a broader community audience at the weekly Life Enrichment program. 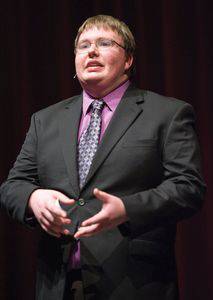 The Kansas Institute for Peace and Conflict Resolution (KIPCOR) sponsors and organizes the annual competition at Bethel.

Traditions have always held a place of high regard in the Mennonite Church, Unruh said, without us asking what these traditions do to people who don’t fit the mold. Mennonites pride themselves on being nonviolent and understanding, but our traditions are not as [peaceful] as we think.

He went on to argue that traditions can be violent—used to socially isolate, stigmatize and suppress the voices of those who dare to break traditions, all things that in Unruh’s observation the church has done.

We need to not hide behind the power of tradition, Unruh concluded. Rather we need to have a real discussion about issues the church is facing.

Traditions are not inherently bad, but the way we are using them is socially violent and that needs to change.

Williams noted that although the Declaration of Independence gives every American rights [of] … life, liberty and the pursuit of happiness, this is not the America we are currently living in—rather an America of discrimination, poverty, racially based underemployment and gender inequality in wages.

Williams’ challenge: to stop waiting for a superhero of the status of Martin Luther King Jr. or Gandhi to come forward and save the country, and remember the power of community.

The superheroes of the past came from communities that had built their foundations and supported them, Williams said. He noted that Christians’ primary superhero, Jesus, prepared his community to go on without him.

We must become tired of injustice before we can become a community dedicated to change, Williams said. And when we finally get tired enough, we must put all of our differences aside in hope for a better future.

Siebert’s speech focused on loving neighbors or, more specifically, the fact that it’s generally easier to love the neighbor we haven’t met than to love the ones we actually know—and disagree with.

She first described a Bethel interterm trip she took to Lesotho and South Africa, a life-changing encounter with global neighbors.

Siebert contrasted that experience with her struggles to love the neighbor when she was a student at Topeka West High School, with four members of Westboro Baptist Church (which has given Topeka an international reputation as Hate Capital of the World) as classmates.

She also recalled WBC’s picketing Bethel in 2011 over a production of The Laramie Project: 10 Years Later and the deep feelings that surfaced for her at the time. Siebert framed her discussion in the context of her status as a millennial, noting this makes it more difficult to accept an ongoing challenge like loving those who continue to hurt us.

Nonetheless, discussions of how to peacefully respond to a hateful protest [at Bethel made me] a mediator in my own struggle to protect the rights of my gay friends and also extend a hand of compassion to … people who may have never experienced God’s love the way it was meant to be given: unconditionally. To everyone.

Unruh sent his manuscript along with a DVD recording of his speech to Mennonite Central Committee headquarters in Akron, Pennsylvania, to be judged against the first-place winners from the other Mennonite and Brethren in Christ colleges and universities in the United States and Canada.