As the spring semester wound to a close, the last two convocations of the school year recognized students for their academic and athletic accomplishments in 2013-14. 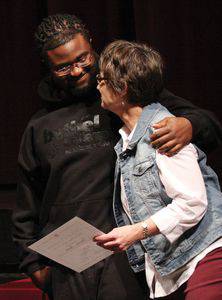 Brad Born ’84, vice president for academic affairs, opened the May 2 convocation by expressing thanks to Nathan Bartel ’02, assistant professor of literary studies, for his tremendous leadership of convocation over the past three years. Bartel left Bethel at the end of the school year to take a position with Flint Hills Design, North Newton.