Nothing but nets: 500 free throws raise funds to fight malaria

Bethel College freshmen Daniel Ratzlaff and Heather Eddy are already learning how to take research from theory to practice. 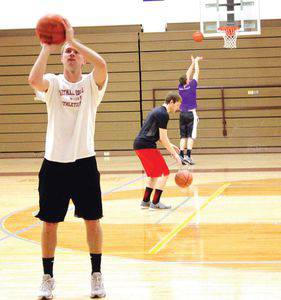 Jared Regehr, in foreground, takes a whot, while Daniel Ratzlaff, in middle, dribbles during a free-throw challenge that raised money to buy mosquito nets in malaria-prone areas around the world. Photo by Xi Cheng.

Both are recipients of a Health Science Scholarship and part of the STEM Learning Community at Bethel, where junior and senior science majors mentor students just starting out.

Their professor, Dwight Krehbiel ’69, had learned about Nothing But Nets, a grassroots effort to combat malaria by raising money for mosquito nets through basketball.

Ratzlaff, Eddy and their student mentor, Jared Regehr, graduating senior, decided to hold a free-throw challenge.  People signed up to give so much money per free throw—the goal was for Ratzlaff and Regehr to try to make 500 in an hour.

I thought doing something tangible was a great idea, Ratzlaff said, the perfect culmination of our work on our research paper and poster.

The average American will hear tidbits about malaria and how it is bad, but normally not give much thought to it. Writing the research paper made me think, ‘Wow, this is really an issue, it’s adversely affecting so many people.’ So when Dwight mentioned the chance to help make a difference, I was all for it.

It was [a way of] doing our part in helping fight against malaria and West Nile virus, Eddy added. The challenge raised at least $500, which will buy at least 50 insecticide-treated mosquito nets to be sent to Africa through Nothing But Nets