Students got a canine stress break May 12 during Reading Day, the Monday before spring semester final exams began. 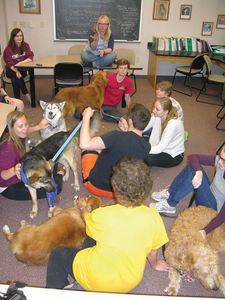 Ashley Klein of Newton, a 2013 Bethel graduate, and junior Laura Jensen got together to plan a puppy play date where students could come by during a two-hour period to pet and play with the dogs.

Klein brought her 8-month-old German shepherd, Sherlock, along with her older dogs, a husky named Shadow and a golden retriever named Lily.

Also joining the fun were community members Bev Regier ’78 and her service-dog-in-training (also still a puppy), Harvey the Labradoodle, and Vada Snider ’80 with Amber, a mixed-breed dog.

Studies have shown that interaction with pets helps reduce human stress levels. Both Klein and Jensen noted that they’d read about other colleges holding similar events and decided they’d like to try it at Bethel.