A Bridge of Community

Everybody has their own ideas about what constitutes the Bethel experience. But one thing seems to show up consistently: community. 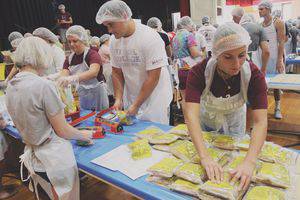 This fall, Bethel student life and admissions staff, along with Brad Born ’84, vice president for academic affairs, planned and initiated a new beginning-of-the-year program that tried to capitalize on Bethel’s strong community in order to help new students succeed here.

The program was called Bethel Bridge—two days of seminars, all-school meetings, recreational activities and a service project. It began on the Monday after students had moved into residence halls, when classes would normally have begun.

Our primary target was freshmen and new transfers, Brad says, rooted in retention [efforts] but aimed at providing a better orientation or introduction to Bethel College.

Results of a survey done after Bethel Bridge with new students showed that what rated highest was something that mostly had to be inferred, and that was interactions with others. Other freshmen or transfers. Returning students.

The activity students rated highest, Born said, was the time on the Discovery Adventure Course. Every College Issues Colloquy (CIC, required of all first-time freshmen) section spent time with their CIC instructor and a trained facilitator going through one or more elements on the outdoor course. 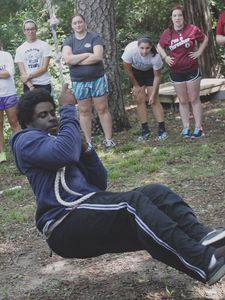 It broke down barriers and made us more comfortable with each other, noted one student, so we feel comfortable giving opinions in class right at the beginning of the year.

I got to know more people through simply having fun and doing things together, said another. You learn more about a person in one hour of play than in one year of work.

It was a physical task, followed by processing—How did you feel? What worked well? What didn’t?, she says. Every single student was part of the conversation, willing and happy to be there, engaged in the process. People started to get a bead on each other’s personalities.

Since then, I’ve heard some fairly compelling arguments from my CIC group for doing it again, and not just to get out of ‘class as usual.’ They’ve said, ‘It gets us on track.’

Second highest ranked of the Bethel Bridge activities was the food packaging event, in which the student body was divided into two groups and competed to see which one could package

25,000 meals in the shortest amount of time. All 50,000 were then packed up and delivered to the Harvey County Food Pantry, housed at the Salvation Army office.

And while students appreciated the chance to give something and connect to the wider Newton community through a service project, again the comments centered on how the project fostered interaction.

It was fun, says first-year student Kamen Hinzman. I liked it. I liked getting to hang out with everyone, and helping others. 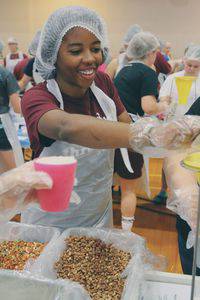 He added, Our table was the first one done. Our group worked well together.

A project like the food-packaging brings people together, says Ryan Peete, a junior, and Sybella Sandoval, a freshman, found it exciting to help others. Michelle Peachey, a junior, appreciated working with people I didn’t know before.

Another student had this observation on the survey: As a transfer student, I found the food packaging service project was most beneficial, because it got me interacting with new people, working together and bonding.

The theme continues in other assessments of the event, Brad says. The comments from the survey show that students enjoyed the more academic settings when they were interacting with others students on something that wasn’t going to be graded.

Christine led a seminar on social media, How we use media, how media use us.

It was well-attended—I had more than 30 students, she says. I got to see more interaction between [students from all years] than I usually do. And I’ve seen it outside of class, people talking to others whom they said they hadn’t met before the seminar.

She benefited as well, she says. I connected with students in a broader way than I usually do. I determine success based on developing connections to students I wouldn’t otherwise.

Brad also noted that Bethel Bridge made planners aware of some things first-year and other students want that they weren’t as tuned to before.

Of the sessions students could choose, the two that filled up quickest were Yoga for Anxiety with Barbara Thiesen ’81, and Don’t Freak Out—Tips for Managing Stress with counselor Joanna Bjerum ’05.

Fall athletes were the first to be able to sign up for Bethel Bridge options, so it wasn’t only first-year and new transfers who went for these, Brad says, but the survey comments show those groups especially appreciated them.

The ‘Don’t freak out’ class was awesome, wrote one. It helped me change my perspective on stress. Another said, It stopped my dizzy, overwhelmed feeling about being in college. 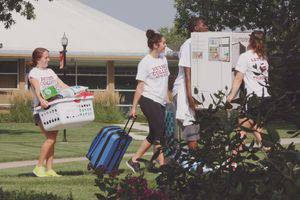 And that seems to be paying off as the semester has wound on.

Says Paige Townley, director of First-Year Success and resident director for Haury Hall, the all-freshman residence, The first-year students seem to be more engaged. There is definitely more of a community feeling, which I know from seeing more people hanging out in the lounge and more inter-mixing between groups. It’s all more than last year.

The student assessments and faculty feedback on Bethel Bridge will lead to some changes in next year’s programming, says Brad, but overall, it feels like a success with a good sense of direction for next year.

What we can do best in a two-day program is, certainly, give an introduction to, and some help understanding, college academics and academic expectations, he says, but especially reinforce the values of the institution through a service project and, based on the feedback, create activities that help first-year freshmen and new transfers adjust to and feel comfortable at Bethel.