Never waste a good centennial, and other stories

Memories matter. And we remember them best, I think, in story form...

When I accepted the invitation [in 1971] to leave Florida as a professor and come to Bethel as president, some anxiety arose. I began to get cold feet, because the situation here was serious: a sinking enrollment under 500, unbalanced budgets, tension with churches that needed to be healed and a Vietnam War on, alienating town-and-gown relations.

And if I did come, what could I do with no resources to make much-needed changes? I would simply preside over a worried and money-strapped school. 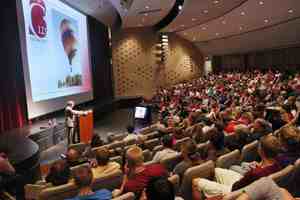 So I said I would come, but with one condition – that the board raise $100,000 (the equivalent of over $500,000 in today’s dollars) in three weeks for a President’s Contingency Fund to jumpstart needed changes. Maybe, deep down, this was a way to provide an option of saying no, since how could they raise that amount in three weeks? (The total private gift income of the previous year at Bethel was only $120,000, and there were only 18 members in the President’s Club.)

But, led by Dr. Willard Kaufman ’49, Elmer Ediger ’40 and former president E. G. Kaufman ’16, the board surprised themselves and me and did it. This [paid] immediate start-up costs for two new departments, business and social work, and permitted the first faculty raises in three years.

Also important, two unplanned fringe benefits came into play. First, as important as the money raised was what the challenge did for the board itself. It gave them self-confidence and optimism and made them active stakeholders in looking beyond problems to solutions. …

Second, going outside the always skimpy operating budget to jumpstart new programs set a precedent used numerous times thereafter – for example, to fund the position of campus minister. Bethel had had no such position for years. So three years of salary was pledged by donors and Jerry Weaver became campus minister – and we would not even want to think about not having this position today.

Then, there was the nursing program. The old three-year RN certificate program with Bethel Deaconess Hospital died or ended the year I came. What to do?

Again, [we went] outside the budget for three years of start-up costs for a new baccalaureate degree in nursing program. It quickly became our largest department.

Is there a moral to the story? I think of Ecclesiastes 11:4 in the Living Bible translation, which says, If you wait for perfect conditions, you will never get anything done. Many Bethel supporters were now beginning to move their minds and their money to think beyond problems to solutions for Bethel.

[When it was time for the inauguration in October 1971,] the climate on campus was heavy, sober, serious, for good reason: the country was in a war without end or reason in Vietnam. Not much student fun was visible on campus.

So to lighten up the mood, I said, Let’s pitch the traditional inauguration and just come together for a festival of fun, like a family reunion.…

There were booths on the Green; food, glorious food; music; children’s games; and student contests. Senator Mark Hatfield [of Oregon], a rising progressive Republican, gave the inaugural address to some 3,000 people inside and standing outside Mem Hall. …

I assumed the inaugural festivities were a one-and-done occasion…. Then a month later, the president of Student Senate, Bob Voth ’72 of Goessel, came into my office and said the Senate sensed that the event lifted spirits so much and built community. Could we do it again next year? (Kindly adding: Without requiring a new president and inauguration.)

The annual Fall Fest was born and became a much loved Bethel tradition. …

In 1974, a national college fad was streaking, and of course it came to Bethel. Some male students, pretending they were Superman – faster than a speeding bullet – attempted to run naked across the Green to Haury and back. But Bethel students were not Usain Bolt at the Olympics. They were slow and by no means a blur to the naked eye.

I remember a phone call one evening from our North Newton police chief, Arly Funk, one of a kind. Arly says, President Schultz, I have three naked football players, who say they are from Moundridge, in the back of my squad car. What should I do with them?

I said, Well, would you deliver them as inconspicuously as possible to Goering Hall and I will follow up on the matter.

But much more visible and community arousing was a front page picture in The Newton Kansan of a Bethel student, naked except for running shoes, running through a bar on Main Street.

Talk about hitting a naked nerve! Over the next week, the paper printed 134 letters to the editor, which were wonderful to read. The problem was that The Kansan’s pictures were often of poor quality, but this one was not. It was taken by a Bethel student photographer, who had done all the excellent photos in my wife’s book on wheat weaving. The picture was very good.

The letters divided three ways. About 20 percent of the writers said this was just a normal college prank, no more than KU fraternity pranks, and it was great to see that Bethel students were just ordinary college kids having fun.

Maybe 30 percent of the letters said the picture proved once again that Bethel was a godless, peacenik, unpatriotic school on the road to promiscuity and hell.

But to the newspaper’s surprise, half the letters attacked the newspaper for promoting pornography. It was supposed to be a family newspaper and here my young daughter brings it in and opens it up to find a nude man on the front page. Several said they were dropping their subscriptions immediately.

The only thing dropped in the bar by the student streaker was one of his well-worn running shoes – sort of like Cinderella at the palace ball. I was tempted to try it on a few suspects to see if it would fit.

The next May at commencement, the shoe – sprayed glistening gold and mounted on a stand –was given me as a memento with the words: What every well-dressed Bethel student wore in 1974. …

I should close with a centennial story. In fundraising, you never want to waste a centennial. They don’t come around that often.

So in 1987, Fall Fest was stretched to five days. There were 100 activities scheduled and 16,000 attended various events in spite of rather lousy weather. …

The centennial story I will always remember best happened at the kickoff for the Centennial Campaign at the 1984 Fall Fest with the slogan: Up, up and away. What would be a more fitting image than a hot-air balloon launched from campus with the president tucked in the basket? (It was not my idea, I might add.) 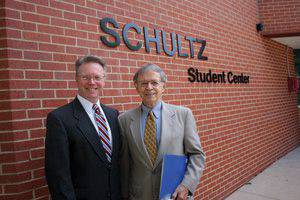 Harold Schultz, Kansas City, Mo., was president of Bethel College from 1971-91. This excerpt is from a convocation presentation he gave Sept. 14, right before the rededication of the remodeled Schultz Student Center.

The day was very windy, hardly a surprise in Kansas. The launch kept being delayed until the wind dropped to the maximum allowed for hot-air balloon launchings. At 4 p.m., we climbed into the basket. Larry Voth ’58 was to go up with me, but he had wisely disappeared, so Waldo Leisy ’39, a board member, joined me. Up we went, for my first – and last – hot-air balloon ride. Once off the ground, there was a downdraft over the Science Building (now the Academic Center) and the balloon flew sideways, instead of up. People on the ground kept waving and pointing to Warkentin Court. We thought they were just giving a farewell wave. We waved back.

Until all of a sudden, the basket brushed a tree and hit the roof of Warkentin Court. Fortunately, we stayed in the basket and it began to rise. The only problem was, sometime we had to land. Which we did, hard, four miles away, on our side with the basket skidding 100 feet.

Is there a moral to this story? Probably not, unless it is a warning to simply beware of hot air, whether it comes from balloons, college presidents or political parties this election year.

Thank you all for this occasion to share a few stories of your college and mine. It good to be home!