It took Tony Graber ’73 some time to finally settle on his career, but he seems to have found it at Bethel. He retired in August after 27 years, the last 22 of them in the financial aid office. 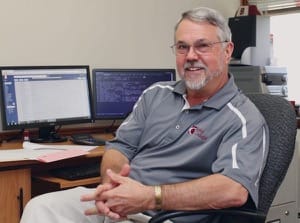 Tony Graber with the computer screens and numbers that were an integral part of his job at Bethel for the past 22 years.

Graber first came to Bethel as a student in 1969. He grew up on a farm near Kingman, attending Bethany Mennonite Church (which no longer exists), and a three-room school for the first eight grades.

“Five of the six kids in my family attended Bethel, but only two graduated,” Graber says. He was one who didn’t.

Probably the most life-changing thing that happened to him at Bethel was meeting Sue Schrag from McPherson. They got married after their sophomore year, and since Sue knew she wanted to pursue early childhood education, a program Bethel didn’t then have, the two went off to Manhattan to Kansas State University. Graber completed his degree in sociology and then almost all of a master’s degree in correctional administration at K-State.

In the meantime, however, Tony and Sue became house parents for a youth home that accepted both “juvenile” (unable to stay with their families for non-criminal reasons) and “delinquent” (criminal-involved) boys. Not a good combination, Graber says. And it showed him he didn’t want to go into what he had thought was his chosen field.

There followed a string of years in restaurant management, beginning with the McDonald’s in Junction City, where he started out taking orders behind the counter and worked his way up. In 1982, Graber’s father, Harvey Graber, now retired from farming, was working on the Bethel maintenance staff when he died of a heart attack. In 1983, Tony and Sue returned a bit closer to home, and Tony began managing (as part owner) a Dairy Queen in Newton.

He added another Dairy Queen in Wichita. Then he was at the McDonald’s on Main Street in Newton for a year, then at Mid-Continent Cabinetry in Newton, then working for Grandy’s restaurants in Wichita, all management positions. Finally, in 1989, Jim Huxman hired him at Bethel as an admissions counselor. His territory was northeast Kansas, along with the Beatrice, Nebraska, Freeman, South Dakota, and Mountain Lake, Minnesota, areas.

Graber enjoyed those years, he says, “although getting stuck in a blizzard in Freeman wasn’t fun. The only place I ever found poppyseed pie—not poppyseed roll—was at the Freeman Café.”

After five years in the admissions job, Graber also took on a position in financial aid, working with Dick Koontz ’72, then the director. Graber’s main job was awarding grants. In late 1999, he moved full-time into financial aid, and he retires as the director.

“I found out I liked numbers,” he says, “and that is what financial aid is, though I needed it for management, too.” (He knows he counted millions of dollars over his years in the restaurant trade, especially at McDonald’s.)

During his tenure in Bethel’s financial aid office, Graber calculates he has done roughly 10,000 financial aid-package estimates, around 1,100 each year. This is the part of his job he’s maybe most proud of, he says, and very much enjoys.

“I always put the family members in certain chairs in my office— student here, the parent here if there’s just one, or the two here. Usually the dad hangs back at first. Then he starts to get interested. And by the time we’re done, he’s pretty engaged, especially if it’s a good estimate.

“We do an estimate for every prospective student family, and that is actually rare. I think other colleges are afraid to do it. Families tell us the other schools don’t, and that they appreciate it. I’m proud we do this.

“Dick Koontz told me, ‘The one thing you can’t predict is a family’s preconceived idea of how much aid their student will get, or how they will react to the estimate, no matter what it is,’” Graber adds.

“One of my greatest joys has been showing families that Bethel can be affordable,” he says. “It has also been one of the biggest challenges. I’m amazed at families’ commitment to send their kids to college. Sometimes they aren’t being realistic, but sometimes they do it.

“Another challenge was walking the line between needing to stay within our budget, and coaches and admissions counselors saying: ‘We need to give more money—that’s why kids aren’t coming.’”

Graber has served under seven different presidents (counting one interim) in his time at Bethel. When he started in admissions, the cost for tuition, room and board for a year was $8,640 a year. Now it’s $35,130 —he points out that the price of “your basic Buick” has changed at about a parallel rate.

“Fewer people are taking out loans to pay for college,” he says. “Fewer are filling out the FAFSA [Free Application for Federal Student Aid, required of anyone seeking need-based aid] and more are applying for Pell Grants.” This indicates, he says, “the squeezing of the middle class.” He doesn’t know if that means students in this income bracket aren’t attending private colleges in the numbers they once were or if there are simply fewer of them.

Tony and Sue are the parents of two sons, Christopher, Bethel Class of 2000, and Jeffrey, Class of 2004. They have five grandchildren.

Graber is confident he’ll be busy in retirement (Sue plans to work one more year as a preschool director before she retires as well). He’s long had a hobby of going to garage sales and auctions, looking for certain items.

“I have been collecting old clocks—about 250—and really need to reduce that number, per Sue’s instructions,” he says. “I have a garage full of items to sell on eBay, so that will keep me busy this year. I also hope to enjoy the fall weather and paint my house.

“Between eBay, garage sales, auctions, golf, table tennis and my list of things to do at home, I think I will have plenty. I am very much looking forward to it!”