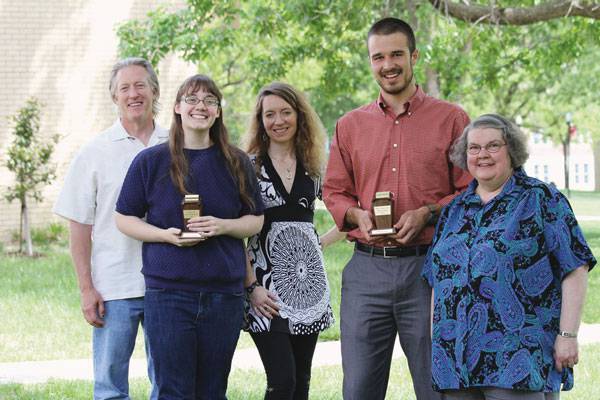 Bethel had the second-highest number of students to be named to the Kansas Athletic Trainers’ Society (KATS) 1st Team for the 2014 academic year. Those students were graduating seniors Mariah Ekart, Taylor Morris and Tanner Steingard, and seniors Tori Kaufman, Kendra Scott and Lauren Ulrich. Graduating senior Brooke Powers was named to the 2nd Team and sophomore Rachael Terbush was Honorable Mention.

Bethel College’s young forensics team accomplished a clean sweep, with every one of its members qualifying to the national tournament, three of them for the first time. One of those, freshman Shaelyn Atwood, advanced to semi-finals in Communication Analysis at the tournament, held in April on the campus of Lewis & Clark College, Portland, Oregon. The Threshers finished 37th in the nation, 12 places higher than last year.

Sophomore Jacob Miller placed first and graduating senior Jesse Voth-Gaeddert second in the Bethel section of the C. Henry Smith Peace Oration contest. Miller’s speech was titled “For the sake of peace, please remember that not all terrorists are Muslim” while Voth-Gaeddert spoke on “Bridges of Understanding.” There were two faculty awards given at the end of the school year. Brad Born ‘84, vice president for academic affairs, presented both. The David H. Richert Distinguished Scholar Award went to Karen Bauman Schlabaugh, professor of music, while Dan Quinlin, professor of languages, received the 2015 Ralph P. Schrag ’37 Distinguished Teaching Award during commencement.

Kent Allshouse, athletic director, introduced a new award this spring, to be given each year to an enthusiastic Bethel athletic supporter and named to honor “Bethel’s #1 fan,” Loren Reusser ’59. Allshouse inaugurated the award by presenting it to Reusser himself, who was present with his wife, Peggy, at the final convocation of the school year.

Bethel is one of only three private faith-based colleges in the state to be named a Christian College of Distinction.

Thresher golf joins volleyball in being named the first KCAC Team of Character in their respective sport.

The 2015 URICA Summer Scholars are Will Shoup in literary studies, Renae Stucky in history, Lila Tibbets in psychology, Leah Towle in education, Natalie Unruh in biology and Emily Wedel in biology. URICA Summer Research Grants give a stipend to the student and a donation to the department s/he is working in. URICA stands for Undergraduate Research, Internships and Creative Activity.