Epp to Graduates: Build from your Bethel Foundation

As he addressed the Class of 2015 at commencement May 17, E. LaVerne Epp ‘72, Lawrence, got a little personal. 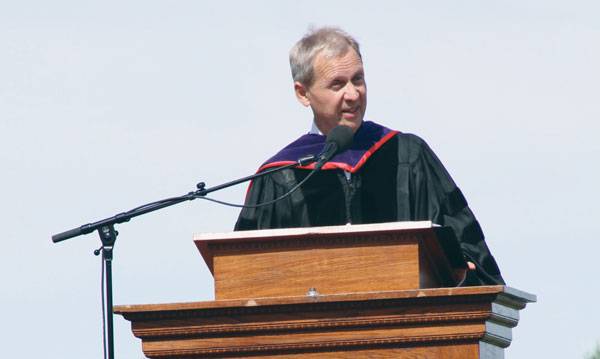 E. LaVerne Epp, Lawrence, addresses the Class of 2015 at this year’s commencement ceremonies.

He recalled “a day in May much like this one and a 21-year-old young man, a history major, sitting where you’re sitting” among his other graduating classmates.

In other words, Epp said, in an address he titled “From Here to There”: “How do you take a memorable college experience and [use it to] build careers and lives?”

Epp had three suggestions, starting with “Be a thinker.”

He quoted from Ralph Waldo Emerson’s essay “Intellect”: “What’s the hardest task in the world? To think.” Not from the neuroscience perspective on the biological activity of the brain, Epp said, but in the sense of forming ideas, asking questions and solving problems.

“Keep an open mind,” Epp said. “That’s how you become a thinker.” Epp’s second suggestion was “Be ready.”

“You all know the statistics,” he said. “You [will likely] have four careers and seven job changes over the course of your life. And I’m right on track.”

After Bethel, Epp earned a degree in law. He was a practicing lawyer and judge before founding his own company. He served as Bethel College president for three years and now is executive chair of the Bioscience and Technology Business Center at the University of Kansas—and an occasional January interterm instructor in entrepreneurship at Bethel.

Epp commended the Class of 2015 for already having practiced “readiness,” using specific (though unnamed) examples of members of the class such as the football quarterback who majored in communication arts and the natural sciences major who added a minor in literary studies.

Finally, Epp’s third suggestion was “as difficult as it is simple: Be grateful.

“A college degree is an achievement—be worthy of it and be grateful for it.”

Brad Born ‘84, then vice president for academic affairs, introduced the class of 2015 by citing a number of its characteristics, including the fact that 74 of the 95 graduates are from Kansas; the largest cohorts of 2015 graduates are within two of the professional programs, nursing (26) and social work (15); and at least four graduating seniors are following a long-standing Bethel tradition of taking voluntary service assignments, both overseas and within the United States, soon after graduation.

At the baccalaureate service earlier in the day, several graduating seniors reflected on their journeys at Bethel College, in keeping with the theme from Dr. Seuss: “You have brains in your head. You have feet in your shoes. You can steer yourself any direction you choose.”

Katie Schmidt noted that what she’d found was “a community— a group of people who care about what I have to say. That is Bethel.” She cited one of the foundational scriptures for the baccalaureate service, Isaiah 42:16: “I will lead the blind by a road they do not know ...I will guide them...”

This idea of “journeying with God parallels my last four years, my years at Bethel,” Schmidt said. “My journey at Bethel has been about seeing God in people and in this place.”