A love of creating things has shaped the lives of the Gaeddert brothers, Joel ’06, Aaron ’11 and David ’13, who grew up in the Kansas City metro area and now live within a block of each other in North Newton. 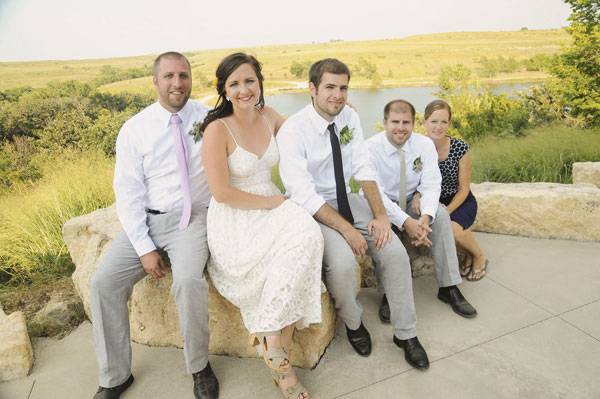 The Gaeddert brothers at the wedding of Leah (Clark) and David, from left: Aaron Gaeddert, Leah and David Gaeddert, Joel and Crystal Gaeddert

David, a natural sciences major, has always been involved with computers—he built his first one in middle school. Aaron’s degree was in art, and his senior project at Bethel became a grid product for Joel’s company, Flint Hills Design (FHD). Joel graduated with a degree in natural sciences and math and has always liked working with metals and digital technology.

The brothers now work in two local businesses that call on their varying, related interests and areas of study and also carry on a family tradition of entrepreneurship that includes their grandfather, James Gaeddert ’62, and father, Greg Gaeddert ’83.

Joel founded FHD in 2008 and is the CEO. Both David and Aaron worked there as college students. David is now principal and lead developer for the company and Aaron is artist-in-residence. Working from a small warehouse in North Newton, the company started out designing websites and museum exhibits and has added a focus on video production and motion graphics.

Threads of creativity, “making things” and using everyone’s skill set runs through the brothers’ lives and businesses. So does developing sustainable businesses and products that support the community. For example, Prairie Harvest bakes and markets—around the country—a line of peppernuts (tiny spicy cookies) that originated as a family business in Goessel.

They also want their business to support global economic development. FHD and the family members have recently become more involved with Mennonite Economic Development Associates (MEDA), with its goal of finding and supporting sustainable and appropriate business solutions for socio-economic problems in the developing world.