The newest face in Bethel athletics has a musical challenge in front of him. 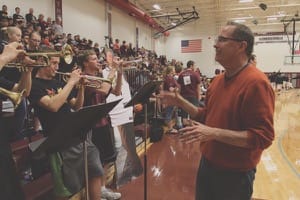 Newly appointed Bethel scramble band director Brad Shores leads a pep band made up of his students at Haven High School during the Bethel-Tabor game, the final one of the regular season, Feb. 20.

Brad Shores, Haven, will recruit for and build Bethel’s first-ever scramble band, the only one of its kind in the state of Kansas.

He begins his position as athletic band director in mid-May.

A scramble band, or scatter band, is a particular type of field-performing band with distinct characteristics­—most notably, scramble bands don’t normally march. The name comes from the way the band moves between formations—by running to each without using a prescribed path, called scrambling or scattering. The band will also function as a pep band.

Shores, who has been named the Kansas Music Educators Association (KMEA) Outstanding High School Music Educator for 2015-16, is currently the middle-school and high-school band instructor for USD 312 in Haven.

He has been there since 2000, leading marching, pep, concert and steel drum bands as well as giving instruction in guitar and music theory. Shores is himself a steel-drum player.

Before that, Shores was the middle-school and high-school band instructor at USD 309, Nickerson-South Hutchinson, where he was twice honored as Teacher of the Year.

He has also taught strings for grades 3-8 at USD 69, Paradise Valley, in Phoenix.

“We’re thrilled to welcome someone of Brad’s quality to begin this program,” said Bethel President Perry D. White. “He brings with him a reputation as not only an excellent musician, but also an imaginative, creative and engaging teacher.”

“I could not be happier to have someone with Brad’s qualifications on board to build this new program and represent Bethel College,” added Kent Allshouse, athletic director.

“I’m excited to take on this challenge, of starting a brand-new type of band and working at the college level,” Shores said. “This new group could greatly enhance the spirit of Bethel College.”