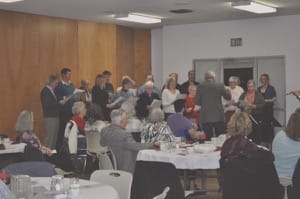 “It began in the 1946–47 school year,” said Joleen Siebert ’73, emcee. “Alumni and supporters in California are contacted, but the bulk of the attendees are from Reedley and Fresno. Prospective high school students are invited as guests of the Bethel Fellowship Committee.”

An alumni choir performed “O Thou, in Whose Presence” by former music professor J. Harold Moyer ’49, directed by David Boldt ’78, with Andrea Friesen ’91 on flute and Chris Janzen ’04 on guitar. President Perry White and Dalene White attended, and he gave an update from the college.

“It was a lovely evening,” Siebert concluded.

As part of the program, Roberta (Graber) Linscheid ’79 asked alumni to jot a college memory on notecards supplied at the tables. Then she read them to the audience. Some recollections were anonymous; others added their name to their words. 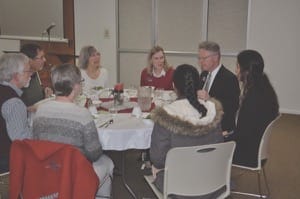