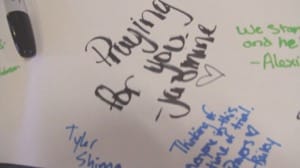 After a shooting at Excel Industries in Hesston Feb. 25 left four people dead and more than a dozen injured, Bethel College students reached out to the community down the road. Professor of Business Allison McFarland’s Consumer Behavior class (for which Excel is a local case study) organized a poster signing outside the cafeteria. Here, Alexis Borg signs the poster, which was later delivered to Excel employees. There was also a service of prayer and candle-lighting, along with a poster signing specifically for Hesston College, in chapel the Wednesday after the shooting.

Scott Weston will lead the volleyball program. Weston comes to Bethel from McCook (Nebraska) Community College, where he was head volleyball coach as well as assistant housing director.

In his one season at MCC, Weston coached one All-Region and 10 Academic All-Region players. The team was named All-Tournament and Weston was Region IX Coach of the Year.

Prior to that, Weston was head volleyball coach and assistant sports information director (SID) at Iowa Wesleyan College, Mt. Pleasant, for two seasons.

He is a graduate of Missouri Western State University, St. Joseph, with a major in physical education, a minor in athletic coaching, and K-12 education certification.

Jeff Hoskisson, who was just named the U.S. Track & Field and Cross-Country Coaches Association (USTFCCCA) Regional Assistant Coach of the Year, will fill an expanded job description as coach for men’s and women’s track and field and cross country.

He comes from Eastern Oregon University, La Grande, where he has been assistant track and field and cross-country coach since 2012.

At EOU, Hoskisson has worked with sprinters, jumpers and combined-event athletes, and has coached national champions in men’s indoor heptathlon, decathlon, pole vault and high jump. He has coached 24 All Americans, with 46 school records set during his tenure.

Before his time at EOU, Hoskisson was director of track and field/cross country for five years at Central Methodist University, Fayette, Missouri.

In his final season, 2011, his men’s team won the indoor Heart of America Athletic Conference (HAAC) Championship, the first in school history. Hoskisson coached four NAIA national champions and 18 All-Americans at Central Methodist, and was named HAAC Coach of the Year four times.

Mario Felix will be the men’s soccer coach. Felix comes to Bethel from Denver, where he spent one season (2015) as general manager and team coach of Colorado Rush Soccer Club.

He has a B.A. in sociology from MidAmerica Nazarene and is currently enrolled in the master’s program in athletic administration at American Public University (online).