Bethel was one of six Kansas schools and one of four Kansas private colleges named to the President’s Higher Education Community Service Honor Roll for 2014.

Bethel sent five students in two teams to an annual programming competition, in which one team finished in the top third. Competitors were seniors Brendan Bergen and Dylan Jantz, juniors Yun Suk Kee and Tim Regier and sophomore Zach Preheim.

Bethel was one of 55 colleges and universities nationwide, and the only Kansas school, recognized by the Council on Undergraduate Research for participating in the 15th annual Posters-on-the-Hill event April 29, 2014, in Washington, D.C.

Rachel Pannabecker ’80 (above center), former director of Kauffman Museum, received a Distinguished Service Award from the Kansas Museums Association (KMA), Nov. 7 at the KMA annual conference in Salina. Pannabecker was recognized for her spirit of collaboration and her ongoing commitment to advancing the mission of museums during her 30-year career in the field.

At the National Association of Teachers of Singing (NATS) West Central Region conference and student auditions, held this year at Metropolitan State University in Denver,

This year, the Kansas Collegiate Athletic Conference (KCAC), in which Bethel competes along with nine other member schools, began a new team award. Based on a vote by all KCAC volleyball coaches, the inaugural KCAC Volleyball Team of Character is the Bethel College Threshers, with John Marble, head coach, and Lindsey Chandler ’12, assistant coach.

Three current students have seen their research appear in national forums over the past months. Junior Lila Tibbets and sophomore Azucena Gonzalez (above), along with Guadalupe Gonzalez ’14, presented a poster, “Emotion Effects on Performance in a 3-Back Task,” at the Faculty for Undergraduate Neuroscience poster session for undergraduates, part of the Society for Neuroscience annual meeting in Washington, D.C., Nov. 17. Senior Laura Jensen published “Stereotype Spillover Effects on Women in Mathematics” in Proceedings of the National Conference of Undergraduate Research 2014. The students’ faculty adviser is Dwight Krehbiel ’69.

Senior April Harpe was named the KCAC Player of the Year for women’s basketball for the 2014–15 season. She averaged 16.9 points and 10.3 rebounds per game, leading the KCAC in both categories. 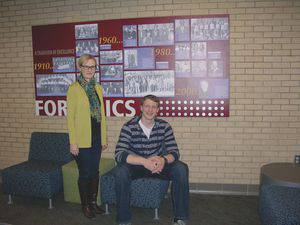 In the spring of 1980, Bethel forensics coach Mark Stucky ’71 took two of his team members, Gail Niles (Stucky) ’81 and Ardie Schroeder (Goering) ’80, to Denver to compete in the Interstate Oratory Contest, which takes the top two students in Persuasion from each of the 50 states. Gail and Ardie were representing not only Bethel but also the state of Kansas in the oldest and most prestigious oratory competition in the country.

Thirty-five years later, sophomore Jacob Miller won the state championship in Persuasion at the Kansas State Individual Events (KASIE) Tournament, which Bethel hosted this year on Feb. 21—and he’ll be going to the 146th Interstate Oratory Contest, April 24–25 on the campus of Berry College in Rome, Georgia.

Gail Stucky, Bethel co-director of libraries, is also assistant forensics coach (with head coach Mallory Marsh). She and Jacob took time to pose for a photo in front of the forensics timeline inside Luyken Fine Arts Center.

In his second year competing for Bethel, Miller qualified all five of his events for the American Forensic Association National Individual Events Tournament (AFA-NIET): After Dinner Speaking, Communication Analysis, Impromptu Speaking, Informative Speaking and Persuasion. He has the state championship in Communication Analysis as well as Persuasion.

Cameron Ponce, sophomore from Elkhart, Indiana, in his first year competing for Bethel forensics, has state championships in Program of Oral Interpretation and Prose Interpretation. He qualified all three of his events—those two plus Dramatic Interpretation—to AFA-NIET.