Bethel College freshmen—most first-year college students, in fact— probably don’t imagine they have much in common with those on the other end of the life spectrum. 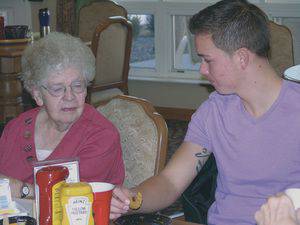 Levi Lettau, right, visits with Kidron-Bethel resident Linda Schmidt at a reception where Bethel freshmen showed the elders reflection papers they had written.

Then it occurred to Rachel Epp Buller ’96, assistant professor of visual art and design at Bethel as well as an instructor for College Issues Colloquy (CIC), which every freshman must take, that there might actually be some similarities.

When I was a freshman at Bethel [in the 1990s], she said, my grandparents had just moved to Kidron-Bethel Village. The campus of Kidron-Bethel, a retirement community in North Newton, is less than a mile from Bethel College’s.

What they described—friends living just down the hall, meeting every day in the dining hall—sounded a lot like college, Epp Buller continued.

I also realized that both retirement and college communities are rather isolated—you’re surrounded mostly by people your own age.

So for the instructor’s choice portion of CIC, which comes at the end of the semester, Epp Buller had her group of 13 students work with a group of Kidron-Bethel Assisted Living residents.

They shared life stories and then the students wrote reflection narratives on what they had heard.

Dec. 1, everyone met for cookies and coffee, and a chance for each student to give a copy of their narrative to the resident.

The students were asked tell the whole group one thing they had discovered in common with the assisted living resident they visited.

I didn’t expect this, said Reese Hiebert, who visited with Louise Koehn ’44, but we both really like watching basketball. She’s a huge fan.

Breanne Rogers, who got to know Mildred Franzen ’52, said, We both like to bowl. She was good. I was not. 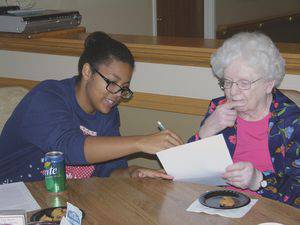 Billie Selichnow and Stephanie Brown discovered a love for the arts in common with Irene Schmidt and Elva Unruh ’46, respectively.

In fact, Brown said, because of her conversations with Unruh, she sat down at the piano and began playing again after several years of not doing so.

Amanda Ramsden noted that both she and her resident, Christine Waltner ’51, came to Bethel as international students (Ramsden is from British Columbia; Waltner grew up in India).

Amber Schmidt-Hayes found that she shared with Esther Wenger ’43 a favorite color (blue) along with hobbies (crafts and scrapbooking) and a love for travel.

On the surface, we may think that college students and seniors have little in common, said Epp Buller, and in our society, those groups rarely interact with each other.

Yet many of the residents at Kidron-Bethel have recently gone through major life transitions, not unlike what many first-year college students experience when moving away from home for the first time.

The goal for this project was to build bridges across the generations, through sharing stories with each other.