Charles Epp ’84, professor of public affairs and administration at the University of Kansas, gave two presentations on campus Feb. 8-9 on police treatment of African Americans and Latinos in a specific situation: the traffic stop. 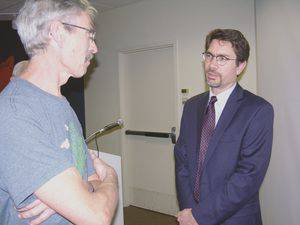 Epp co-authored, with two KU colleagues, Pulled Over: How Police Stops Define Race and Citizenship (University of Chicago, 2014). The book’s publication coincided with a dramatic rise in awareness nationwide of the frayed relationships between police and minority communities, revealed by the deaths while in police custody of Michael Brown and Eric Garner, both young African-American men.

However, Epp began the research that resulted in Pulled Over about a decade ago. When the issue of racial profiling [by police] blew up in 1999-2000, the state approached us [at KU] about doing a study to see if this was a problem in Kansas.

Epp was dissatisfied with the methods and data used in such studies up to that point. It came from traffic citation records, he said. I was interested in what that data didn’t cover.

Things he wanted to know included: Why did the police stop someone and then not write a ticket (the case in almost 50 percent of traffic stops)? What was the driver’s perception of the stop? How did the police officer interact with the driver?

We thought we could do this much better with a survey of drivers, Epp said.

The State of Kansas, on the other hand, thought that proposal was too unusual and withdrew the request—so Epp and his colleagues went to the National Science Foundation, which responded enthusiastically.

Between 2003–04, they conducted a stratified random survey of drivers in the Kansas City area, the results and analysis of which were eventually published as Pulled Over.

As he introduced the findings to audiences at Kauffman Museum Feb. 8 and Bethel convocation Feb. 9, Epp started out with the story of a driver named Joe.

Joe, an African-American man, was following the speed limit when he was pulled over for what the officer said was a warrant check.

Basically, Joe was stopped by an officer who just wanted to see if this guy belonged in jail, Epp said. There was no rudeness or strong action on the part of the officer. Yet Joe said he ‘felt violated.’

You can see the seeds of the black public’s reaction to Ferguson [Missouri, Michael Brown’s hometown], fueled by deep frustration with these kinds of stops over many, many years.

Commonly touted cures, Epp said, are to hire more black and Latino officers, to have better training for all officers, to have them wear body cameras. These are excellent proposals that would improve policing and I support every one of them, but they won’t solve the problems I’m describing here because they are not going to the source of the problems.

They assume officers are doing things their supervisors would not want them to do—that they’re ‘doing the wrong thing.’

However, racially different police stops occur not just in lily-white, poorly trained departments like the one in Ferguson, but also in the most highly diverse and well-trained departments in the country, such as New York City, Los Angeles and Kansas City.

The research of Epp and his colleagues points to a deep fear and distrust of police in minority communities stemming from a very particular kind of policy, developed over the past 30-plus years, to fight crime in a particular way [through investigatory stops].

The policy encourages officers to select people on the basis of suspicion, Epp continued, with very specific protocols on what constitutes ‘suspicion’—such as a black person in a white neighborhood, or someone who ‘looks like they shouldn’t be driving that kind of car,’ or ‘furtive behavior.’

Such investigatory stops can lead to officer searches of a vehicle and in extreme cases handcuffing and detention of the driver. But even when none of these happen, the data show that drivers stopped in such situations feel deeply disturbed and unsettled, sometimes for weeks or months afterward.

It’s a numbers game, Epp said. Officers know that only a tiny proportion of these stops will yield an arrest or any information about crime, so they have to do so many to increase the odds of finding illegal drugs or weapons. Yet study after study shows that ‘the hit rate’ is less than 2 percent.

In order to find one or two or three drivers actually carrying illegal weapons or drugs, the police offend and upset hundreds.

I can’t emphasize enough: This is the core way that professional police departments direct their officers to fight crime.

What those subjected to an investigatory stop (whom data show are far more likely to be black or Hispanic) see is that the law is arbitrary. The police wield arbitrary power. Police actions are unpredictable.

Writing in the Washington Post shortly after the publication of Pulled Over, Epp and one of his co-authors, Steven Maynard-Moody, said, [Investigatory] stops poison blacks’ attitudes toward the police—and toward the law itself. They undermine police effectiveness and turn the citizens of a democracy into the controlled—and resentful—subjects of a security state.

It’s time to end them.