YAWP! calls out literary culture from all corners of campus

The current incarnation of a Bethel literary magazine is hearkening back and looking forward. 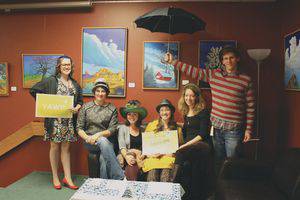 The first edition of YAWP! went live just before Christmas and can be found online at bclines.bethelks.edu (BClines was the name of the previous version).

The presence of a new professor in the literary studies department, Siobhán Scarry, has played a major role in putting new life back into an old literary magazine tradition.

I think it was around 2010, there was one issue of a literary journal called YAWP!, Scarry says. It was a renegade, or an extra, but it was such a wonderful name, with energy and a fantastic literary history (from Walt Whitman: I sound my barbaric YAWP! over the rooftops of the world).

So when the new editors found out about [the previous YAWP!], they wanted to infuse the current literary magazine with that history, the energy and interest.

In the 2012–13 and 2013–14 school years, several students in literary studies and graphic design spearheaded BClines, which was online-only and which Scarry notes was more of a blog and less of a magazine.

Along with its new name, YAWP! has a new look and feel, a new logo and branding, and a redesigned website (though not yet moved over from the BClines URL).

YAWP! is to some degree the new incarnation of BClines, but representing an updated and reinvigorated literary magazine culture, Scarry says. Part of what we’re trying to do is to increase literary production on campus and make it welcoming to lots of different kinds of students and art forms.

In the fall semester, YAWP!, along with the art department, sponsored Exquisite Corpse: An Evening of Surrealist Parlor Games, as well as a flash fiction contest at the end of the semester, in order to raise visibility and extend the base, Scarry says.

The contest required a short story told in 20 words or fewer. We got a lot of submissions and inquiries, says Scarry, from freshmen and others who wouldn’t normally submit something to a literary magazine.

Although this is her first experience working with students on a literary magazine, Scarry has more than a decade of experience in editing and publishing. She was chief copy editor for Wired News in San Francisco for 10 years and served one year as fiction editor for CutBank, a national literary magazine based at the University of Montana.

The co-editors-in-chief of YAWP! illustrate its liberal-arts nature. Junior Terra Scott is an art major while senior Katie Schmidt is a biology major.

Schmidt also has a literary studies minor, kind of by accident, she says. I needed a creative outlet, and I didn’t want to go crazy, so I took literature classes.

She submitted some of her writing to BClines, and Nicole [Eitzen ’14], Tony [Gonzalez ’14] and Ami [Regier ’85, professor of literary studies] decided I would take it over. I said I’d ‘see how I felt about it’ and then Nicole and Tony graduated and I didn’t have a choice.

She is the editor responsible for text and Scott for art. There is also an editorial committee that includes, in addition to the faculty adviser, Scarry, senior art major Jessie Pohl and juniors Allie Shoup (music and graphic design) and Will Shoup (literary studies).

I worked on the design components, says Allie Shoup. I was a major contributor to ‘what colors’ and ‘how to format.’ A lot of young adults are really drawn to home-made, artsy, folky-type things. That was something I want to project: ‘It’s ours, it belongs in Kansas, on the prairie.’

I also really enjoy event planning, such as our Fall Festival table and ‘Exquisite Corpse.’ I think we planned as a team pretty well.

This is an enormously collaborative project, Scarry says. I’ve so enjoyed working with the students, their can-do approach and desire to make this magazine the best it can be.

She adds, Katie has incredibly good editorial instincts. She has a sense of how to cultivate new writers and how to encourage them along—how to do community building.

We kind of fell into a really good thing, so my hope is that can continue, Schmidt says. It takes this core team of five or six individuals who commit some of their time to creating something that’s above the caliber of most college literary journals.

I think we have a tremendous amount of talent at Bethel that we don’t know we have. We’re just scratching the surface right now. The more of a presence we have [as a literary journal] on campus, the more submissions we’ll get. In a couple of years, it could really be something.

Because Bethel is a small college and a liberal arts college, we ask students to think about a lot of things. You might never be asked to think about Gandhi or Jesus or how sports and graphic design fit together, if it wasn’t in your discipline, if you were at a state school.

The fun thing about a college publication, says Will Shoup, is it doesn’t have to be quite so specific in its interests or what it covers.

The next thing for YAWP!, this committee hopes, is a print edition in spring, which will take some money to become reality.

A lot of literary magazines have a launch party, says Scarry, so we may do that as a fundraiser for a print issue.

We’ve talked about trying to get some readings together, like the one at Fall Festival, adds Will Shoup. That’s exciting—it’s not just on paper but it’s in the atmosphere, in the space we share.

College is the perfect time to try these kinds of things out, says Allie Shoup. You don’t have to commit to it [forever].

We know there are secret poets and storytellers. We know people are doing things. We want to beckon them out of shadows: ‘Please come to us and give us things.’

We want to be regional, to serve the Bethel community, says Scarry. Even within that, there are ways to increase our vision about what’s possible, like partnering with events and bringing national authors here to campus [such as poet Tod Marshall of Gonzaga University, who came to campus in mid-March]. We can expose our students to different kinds of writing and continue to increase their abilities.

She also noted that just as BClines was always open to alumni submissions, so is YAWP! The most realistic publication schedule is to follow what’s been started, with a fall edition online only and a spring edition in both print (contingent on funding) and online formats.

Bethel is a wonderful place to start something that could be really good, Schmidt says. Literary magazines can bring a lot of prestige to a college. It just takes one great poem or short story.