Readers of the poster for Bethel College’s Martin Luther King Jr. Day celebration might have been forgiven for thinking it had a typo. 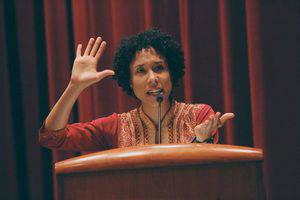 After all, the title of keynote speaker Sarah Thompson’s speech was Moving Toward Conflict—but wasn’t civil rights leader King known for his adherence to nonviolence?

Conflict, Thompson said, has everything to do with nonviolence.

Thompson, who just finished her first year as executive director of Christian Peacemaker Teams and is based in Chicago, opened her talk Jan. 19 at the college by quoting from words that King spoke on the Bethel campus in 1961.

Then, he expressed the need to be creatively maladjusted to segregation, exploitation and injustice.

What a creatively maladjusted person does [is] confront, Thompson said, while sitting steady on a foundation of love and drawing from the wells of compassion.

What someone who confronts you has to say may not be ‘nice.’ It may not feel comfortable, she continued. It probably won’t. But hurt feelings aren’t the same as structural violence. There’s a lot of learning in a discomfort zone.

Disruption is what the civil rights movement did, and we are on the cusp of another civil rights movement in this country. You will need to answer your descendants when they ask you what you were doing when Michael Brown was shot, when Eric Garner was choked, [when the grand juries handed down] no indictments. 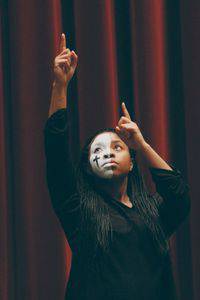 Sophomore Rachel Green was one of four students who did a praise dance as part of the 2015 Martin Luther King Jr. Day celebration.

Both in her Bethel speech and the day before, when she preached at Shalom Mennonite Church in Newton, Thompson noted that CPT has been invited, along with many others, to come to Ferguson, Missouri, where Brown was killed, to stand alongside the people there.

You still have a chance to respond, she said. The invitation has gone out to come together and follow the lead of those who are most affected by this violence.

Thompson went on, Moving toward conflict and exposing it is part of restorative justice. It’s part of healing the wounds we carry on a personal and societal level.

As I’ve been talking a lot about conflict, can you feel the knots forming in your stomach? Sit with that. Examine it. Don’t judge it. We need these responses.

Take a deep breath—that’s one of the best tools we have. The Hebrew word in the Bible for breath is the same as for spirit, throat, voice. Those who breathe together are co-conspirators. If you do nothing more than breathe throughout this presentation, then you are co-conspirators in creating the beloved community. So please keep breathing.

Thompson described CPT actions in 2009–10 in confronting The Body Shop, a national retailer of beauty products and cosmetics that prides itself on selling naturally and ethically produced goods.

Despite this, The Body Shop was buying palm oil from Daabon, a company that was forcing people in small Colombian communities off their land in order to extract the oil.

The Body Shop eventually ended its relationship with Daabon.

These [kinds of] actions work, Thompson said. It’s part of building the beloved community, where poverty, hunger and human exploitation will not be tolerated.

There will be conflict in the beloved community as we seek to figure out what can be the healthiest ways for us to share this planet. Nonviolent conflict can be a generative force. Two ideas rubbing up against each other can create the friction that moves us forward, and open up space for new things to grow.

Thompson challenged her audience to think about who is here and who is not—not only at the event, but in workplaces, classrooms, clubs and social activities

We may not all be guilty, Thompson said, but we are all responsible to move toward a conflict that will change the reality—or be complicit with racism and classism in this country and the world. You may not be comfortable with the movement but it’s wrong to take it out on those who are on the front line doing something. In your own way, join the struggle.

When you hear someone else bring up a conflict, don’t be passive. Don’t withdraw. Come alongside with interest and curiosity. Ask an open question and find places that are conducive to the conversation. 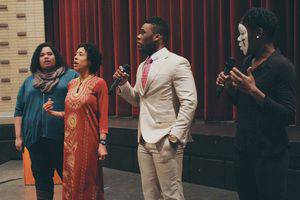 Yes, I know where I am. I’m among European-American Mennonites, and I’m asking you to move toward conflict, she said. Aversion to conflict can keep power static, meaning it’s not circulating and not dynamic. Conflict is natural friction that can help create positive change.

Kingdom of God people don’t always go with society’s flow—we go with the God flow and it’s toward conflict. When you move toward conflict, you can be sure that God is with you.

Thompson concluded her talk by noting that the holidays don’t end for her until the celebration of the day honoring Martin Luther King Jr.

Senior Leland Brown III read a documentary poem that he created by putting together words someone else had spoken or written, in this case King.

Four students performed a praise dance, taken from African-American church tradition and practice, to the song Take Me to the King.

A freewill offering went to support the work of Peace Connections in Newton, whose Circles of Hope program provides education and mentoring to help people pull themselves out of poverty.

Aaron Austin, Bethel vice president for student life, said, We’re excited about what tonight means. Bethel’s seven core values—discipleship, scholarship, service, integrity, community, peace and social justice, and diversity—ring true in the life of Dr. King. Let a ringing in our hearts change us from what we hear tonight.