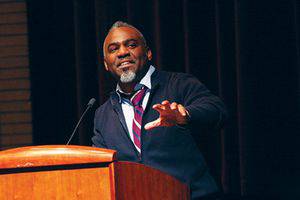 In the keynote address, Ewuare Osayande, who coordinates the Anti-Oppression Ministry for Mennonite Central Committee U.S., spoke on Facing the Giant Triplets: Racism, Materialism and Militarism.

The title comes from the text of a speech King gave April 4, 1967, in New York City—a speech, Osayande pointed out, that condemned the war in Vietnam and was written by a Mennonite, Vincent Harding.

At the end of his address, Osayande said, I’m not attempting to suggest that what needs to be done will be easy. … It will take some heavy lifting.

The image I want to leave you with is the story of David and Goliath. Not David the king, but David the little shepherd boy, the youngest son, tasked with defending his people, taking on the giant who claimed he would conquer and destroy them.

We have to collect and gather five smooth stones from the river, not just any river, but the river where the waters of righteousness flow.

Love—nothing I said here tonight was not stated in love. Courage—speak truth to power. Perseverance—endure the trials and tribulations that come with the pursuit of justice. Grace—show mercy to yourself and others. Faith—trust a power greater than this world, that created all the worlds, that is greater than war, greed or white supremacy.

These are the stones required to defeat the giant triplets. … If we are to get there, it will be because we got there together.