Bethel students on campus the day Nelson Mandela was released from prison remembered that event the day after the former South African president died Dec. 5, 2013.

Facebook was the instrument for a stream of memories resulting from a post by Sara (Jackson) Miller ’90 of a photo scanned from the 1989–90 Bethel College Thresher yearbook. 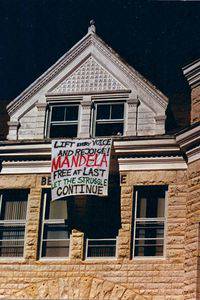 The photo shows a banner made from a sheet, hanging from a third-floor window of the Administration Building. It reads: Lift every voice and rejoice! Mandela free at last. Let the struggle continue.

Feb. 11, 1990, Nelson Mandela left Robben Island after 27 years of confinement. It was a Sunday and an unseasonably warm day, says Miller, then a Bethel senior and now a high school teacher in West-moreland.

Terry Rempel ’90 and Jalane Schmidt ’91 hung the banner from the Ad Building. It seemed like everything just stopped and we all went out on the Green. I have memories of the Bethel bell being rung, but I don’t know where they would have gotten it.

Beverly Baumgartner ’94, Newton, was a freshman in 1990. She recalls thinking: I will never forget this day.

Her roommate, Natasha Janzen (Ulbricht) ’93, would play South African freedom songs in their room, Baumgartner says, so she had a vague idea of the issues. However, [that day on campus] made the people and the situation become real for me.

Miller agrees. It educated us. We knew about apartheid in South Africa, but not much about this person [Mandela]. This got people talking. In fact, it got Rempel and Schmidt in a little bit of trouble with Bethel administration.

I had spent the previous fall semester of my last year at Bethel at the Jagiellonian University in Krakow, says Rempel, who now lives in Tofield, Alberta. I’d witnessed not only the changes taking place in Poland but across the former Eastern Bloc, including the opening of the Berlin Wall.

I had come back to Bethel full of enthusiasm and hope about changes happening in the world, so I guess the release of Mandela added to that sense of hope. I recall discussing at some length exactly what the message [on the banner] would be, tempered by a sense of caution or realism that this was only the beginning and that there was much to do—thus the words of a continuing struggle.

The only other recollection I have of the event was being called in to [President Harold Schultz’s] office Monday morning and being reprimanded, not without sympathy if I recall correctly, for using the Ad Building for political purposes without prior permission.

Almost 24 years later, the Ad Building banner was the first thing that came to Miller’s mind, she says, and those of other Bethel alumni upon hearing the news of Mandela’s death at age 95.

Facebook comments included: This is exactly the picture I had in my head when I heard this afternoon that Mandela had died; I remember that minute, that view. What a day; I remember this as a moment of pure celebration—cheers, dancing, clapping and hollering. Little did we know he [Mandela] was just getting started.