Bethel’s tradition of forensics excellence is now in the hands of a new leader.
Bethel is one of only six colleges or universities to qualify for and compete at the American Forensic Association-National Individual Events Tournament (AFA-NIET) every year since it started in 1978. 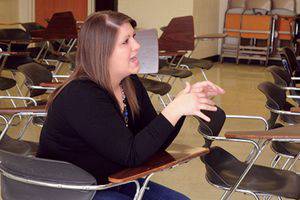 Mallory Marsh in a coaching session with forensics students. Photo by Audra Miller.

Over the past year, the team has seen some changes. Perhaps most significant was Professor of Communication Arts John McCabe–Juhnke ’78 stepping down as director of forensics at the end of the 2012–13 school year in order to focus more on Bethel’s theater program.

This opened up a position and opportunity for current director Mallory Marsh.

Marsh has herself been a forensics competitor since high school. She decided to continue in college, as a member of the University of Nebraska–Lincoln team.

After finishing her undergraduate degree, Marsh wasn’t quite ready to stop being involved in forensics competition, she says.

She secured a graduate assistantship at the University of Alabama, enabling her to continue working in forensics as a coach while earning a master’s degree in communications.

As she looked forward to her impending graduation from Alabama, Marsh found she wasn’t ready to forego speech and forensics for her earlier goal of a future in advertising.

It was around November of the second year of my master’s program, she recalls, and I am just like, ‘I can’t give this up.’ So I started looking tentatively at different places around the nation that were [advertising] for an assistant director or director of forensics.

That exploration led her to the opening at Bethel.

I think maybe in January [2013], this position came up and I got really excited, she says. Having competed for the University of Nebraska, I often saw Kansas schools.

So I had been on Bethel’s campus all four years of competition. And I had gotten to know Dr. John McCabe–Juhnke pretty well. He had judged me so many times I felt bad for that man.

When Marsh saw the position listing, she contacted McCabe–Juhnke, hoping he would remember her from her undergrad years. I was pretty intimidated, being so young out of a master’s program, Marsh says. Getting a director of forensics position is just obscenely difficult especially at a college or university.

Despite her worries, she forged ahead with the interview process. She applied for other openings, in Kansas and Wyoming, but had also fallen in love with Bethel and the campus.

Bethel was by far the best, Marsh says. When I came here for my interview, I loved the people. They were so kind and genuine.

I guess it was a lot of little things. Like having a good relationship with the prior director of forensics, being able to come back to the Midwest, being only four hours from my hometown [in Nebraska].

When she ultimately got the job, her worries weren’t over, she says.

Given the Bethel history of high standards and strong teams, Marsh didn’t want to disappoint students returning to the program. It has helped that the 2013–14 squad is fairly young, with most of those competing in their first or second year doing so.

It’s actually good for me. I would hate to have my first year be with seniors who know how things are done and for me to fail them, she says.

It’s good to come in with a lot of new people. We can learn together how to best frame the program, to take it in the direction we all want it to go, versus me [maybe] not living up to the expectations John has set for so many years, and Mark [Stucky ’71, director of forensics 1980–92] before him. 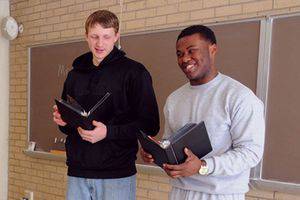 To go to Arizona State University this year and Portland, Ore., next year, to Lewis and Clark College, you really have to make sure your finances [for nationals] are stretching in the best way possible, she says.

Looking ahead, Marsh has big hopes for the future of Bethel forensics. I set myself a goal that in five years I would have a solid team with strong senior and junior classes and then sophomores and freshmen. It’s very important to have upperclassmen who can help keep traditions and mentality of a program alive.

Bethel has a wonderful reputation on the national scale as one of only six school who have showed up to the national tournament every year. Bethel is the only college—the other five are major universities.

We are one of the smallest competing. But everybody knows Bethel for that reason. I hope I continue that very good tradition.