A friend of Bethel—and the daughter of long-time adjunct instructor of guitar, Howard Glanton—created a flurry of excitement in south central Kansas on the evening of March 11. 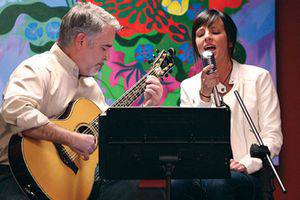 That’s when Kaleigh Glanton, Wichita, earned a 4-chair turnaround from the coaches on NBC-TV’s star-search show The Voice, with her cover of Credence Clearwater Revival’s Have You Ever Seen the Rain?

Kaleigh is familiar to Bethel and North Newton audiences from having appeared a half-dozen times—with Howard on guitar—in the Mojo’s Coffee Bar live music series.

I was starting to do Thursday night music about a year after opening Mojo’s, says owner Patty Meier. I was talking to Howard and he mentioned that his daughter, Kaleigh, was a singer. At that point, she was still in high school.

Kaleigh first appeared at Mojo’s in November 2011 and was most recently on its stage March 27.

It might be a while before she’s back again—but now Bethel can say, We knew her when.