Weather forced some changes to Bethel College’s 120th commencement May 19, but also put the newest capital improvement to the test, which it passed easily.

A large tornado menacing Wichita, and the accompanying severe weather 30 miles away in North Newton, right at the time scheduled for commencement, meant the 108 members of the  Class of 2013 had to forgo both ceremonies in Thresher Stadium and the traditional march around the Green. 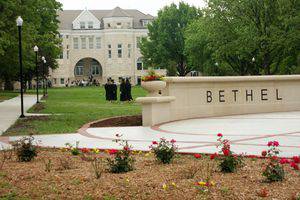 A view of the Green, Ad Building and new entrance plaza shortly before rain forced the 2013 commencement to move indoors. Photo by Vada Snider

Maintenance staff carted one of the college’s threshing stones into Memorial Hall, so the graduates could touch it, according to tradition, as they processed to their seats.

Up until the time it moved to Thresher Stadium, in 2008, commencement had been held for decades in Mem Hall, producing generations’ worth of memories of the heat and humidity of a full auditorium.

Earlier this spring, however, the college installed air conditioning in both Mem Hall and adjacent Thresher Gym. This was its first use with a capacity crowd and it worked perfectly.

Doug Penner ’69, Topeka, Bethel president 1995-2002, who recently retired after 10 years as president of the Kansas Independent College Association and Fund, gave the commencement address, which he titled You want to move a heavy boulder?

To be asked to speak was a rare privilege, even more so when the college is your alma mater, said Penner, who graduated from Bethel in 1969, and in particular for the 125th [anniversary of the college].

Give me a lever and a place to stand and I will move the world.

Leverage, applied properly, dramatically [increases] your strength, Penner said. The impact of the best kind of college education, such as the one you got at Bethel, is that it’s where the lever and the place to stand are developed.

The lever, Penner said, comes from classes in major and minor disciplines, electives and extracurriculars, that give students the knowledge, and the powerful tools to make a difference, that you didn’t have when you arrived.

However, he continued, any good undergraduate institution can and should serve that lever function.

What makes Bethel distinctive from anywhere else you’d have chosen to study is the second piece of the Archimedes quote, Penner said – the place to stand. It’s shaped by Bethel’s four core values of scholarship, service, discipleship and integrity which, he said, produce at least two unique characteristics.

First, you are a steward, not the owner, of your gifts. Unlike ownership, stewardship carries a deep obligation and responsibility to others, not only yourself.

Second, and most penetrating – your values are uniquely yours, not adopted, borrowed or inherited. That’s your fulcrum for moving the big and small boulders – for moving the world.

Penner closed his address by noting a third need, besides lever and location – the energy or, as he said, the desire and emotion to carry on, which come from courage.

Citing his observation of the universal attraction of the character Don Quixote in the novel by Miguel de Cervantes, as well as the example of his Bethel biology professor, Dwight Platt ’52, who went to jail for his peace convictions, Penner said, Courage doesn’t just sit there. It’s contagious. It prods us to think about where we stand and how we act in the world.

He asked the new graduates to consider how their years at Bethel had changed them, developed their competencies and given them examples of contagious courage.

With all this, he said, you do indeed have the capacity to move the world.

Brad Born ’84, vice president for academic affairs, introduced the Class of 2013 by citing a number of its characteristics, including the fact that 85 of the 108 graduates are from Kansas, and that at least eight are following a long-standing Bethel tradition of taking voluntary service assignments starting within the next several months.

At the baccalaureate service earlier in the day, four graduating seniors reflected on the four class years, freshman through senior.

Aaron Rudeen, Osage City, set the stage for Penner’s later words when he said, I thought that at a Christian college, my faith would just come to me, but I learned that I need to put something into it, adding, Bethel has [also] taught me to have an open mind – to accept as many people and cultures as I can.

Whitney Steingard, Henderson, Neb., noted that a liberal arts degree has granted us more than knowledge in our major areas. She cited an experience she had as a sophomore traveling to Haiti over interterm.

The group visited a village where the children they met didn’t speak English nor did the Bethel students speak Haitian Kréyol. Steingard recalled the power of a simple smile and the love from God [that was] demonstrated that day.

David Tedone, Keller, Texas, who came to Bethel as a junior after two years at Hesston College, said, I truly felt God’s presence in every individual I have encountered [at Bethel].

He found remarkable, he said, the time both fellow students and faculty were willing to put into relationships.

I have not found myself in such a community my whole life, and it … gave me a sense of belonging even though I had no Mennonite background and no previous connection. My whole life changed while I was here. Bethel along with God guided me to where I needed to be.