Service trip gives students a chance to see, feel results of their work 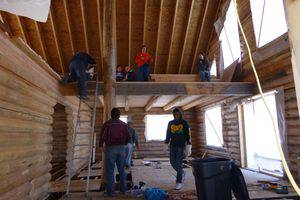 For one group, it meant learning carpentry skills, playing a lot of Catch Phrase, and a marriage proposal.

Bethel’s Service Corps sponsored the annual spring break service trip to Joplin, Mo., which almost two years ago was hit by one of the deadliest and most devastating tornadoes in U.S. history. Mennonite Disaster Service has been on-site in Joplin since October 2011, and that was who the students joined for the week of March 17-23.

They spent most of their time on two projects, painting at one house and installing flooring in another.

One of the things Jesse Voth-Gaeddert, senior from Hesston, most enjoyed was learning a lot of carpentry skills from some of the MDS workers – such as how to put in flooring and not fall to my death from the second story.

Emily Simpson, junior from Gobles, Mich., agrees that it was fun getting to use all the construction tools.

I was at home the Saturday or Sunday after we got back, says Melinda Regehr, junior from Whitewater, and my dad was working on the barn, making a loft. He was saying he needed to get the jigsaw, and I knew what that was! – because we used a jigsaw on the project.

I also enjoyed being able to see my work, the final product, she says. I could actually see that I had done something, [helped build] a solid structure that people were going to live in.

A project the students spent less time with but which paid personal dividends was reinforcing a foundation by putting up framing and pouring concrete to improve a crawlspace/cellar.

They didn’t get to meet the families who were going to live in the first two houses, but the Rutledges, whose house needed the crawlspace work, spent an evening with the group.

They came and had supper with us, then stayed to have devotions with us, says Regehr. They entertained us with their three little girls, 9 years, 5 years and the baby. I never thought I would see [Vice President for Student Life] Aaron Austin and  [student] Michael Clark dance together, but they did because the little girls wanted them to – they were teaching us how to dance.

Austin went on the trip because of his responsibilities as Service Corps adviser. For him, one of the most important aspects was to see the families and the impact we can make.

The Rutledge family told us that other people or groups had come after the tornado and  told them, ‘We can help you’ but then never followed up. Even though the family was OK after the tornado, they had to keep reliving it.

A relatively small project, Austin says, put things in perspective. This is helping give someone a chance to start over and move on.

Regehr was struck by the Rutledges saying to the group, If you ever need help with anything, please call us.

What impressed Simpson: You would think something like [the tornado] would destroy faith. From their perspective, it’s done nothing but strengthen their faith.

Except for the evening of dancing, recreation usually consisted of playing games after supper, especially Catch Phrase and Spoons (using ball-point pens). A bonus of the trip was getting to know other students I didn’t know as well, says Michael Bowman, graduating senior from Syracuse.

Fun aside, there were other, more profound reasons for choosing this spring break option.

What would be a better way to spend the break than serving? says Bowman. I put that in my heart for a little while and then came to the conclusion I should do it, especially after I heard more about the trip.

Last year, I was kind of bored during spring break, says Voth-Gaeddert. So I was thinking about what would be a good way to spend it.

I knew it would be an experience to make me feel more blessed, more thankful – appreciate what I have more, he adds.

I chose to do this because I’ve become really passionate about doing service, says Simpson, who plans to take a year before or right after graduation to do service. And I needed to do something with my hands. I was tired of being in books all the time. I wanted to be outside.

God has put it on my heart to help people in whatever way I can, says Bowman. That was the reason I wanted to go.

The Joplin service trip was the third time Natasha Orpin, graduating senior from Moundridge, had spent her spring break with a Bethel service group, and the second time with MDS. This one will no doubt have a special place in her memory book.

For one thing, her boyfriend, Justin Baldia, graduating senior from Lewisville, Texas, came along – and he had a surprise in mind.

My week was extra special because, in addition to physically working to help rebuild homes and meeting wonderfully gracious people, I celebrated my birthday, says Orpin, and I also got engaged!

On Thursday, Justin traveled with the project director, Harv Hildebrand, from his worksite to mine. My group was painting inside a house MDS had partnered with an organization called Samaritan’s Purse to build.

Harv and Justin had called ahead to my crew leader, who sent me to a room to work by myself. When Justin walked in, he said he had been ‘relieved of his duties’ at the log cabin. He coaxed me down off my ladder. We were both in our work clothes and I was covered in paint. It is a story I will never forget.

It took him forever to get her down from the ladder, says Simpson, and then she wouldn’t take her hat off!

For the rest of the trip, she could not stop smiling.

Remembering their week in Missouri, the other students seemed to have lots to smile about as well.