Bethel wraps up 125th celebration with music from Creation to Broadway

Held May 5 in Memorial Hall, the concert featured a presentation of Haydn’s The Creation with the Bethel Oratorio Chorus, the Newton Mid-Kansas Symphony Orchestra and alumni soloists, along with a special performance by Rachel Kasper Fitzsimons ’88, New York.

Franz Joseph Haydn wrote The Creation (Die Schöpfung), which many consider his masterpiece, between 1796-98. The oratorio depicts and celebrates the creation of the world, with the text based on the biblical books of Genesis and Psalms, and John Milton’s Paradise Lost.

The Creation is scored for soprano, tenor and bass soloists – singing the parts of the archangels Gabriel, Uriel and Raphael – chorus and symphonic orchestra, and is structured in three parts.

The Bethel Oratorio Chorus was made up of members of the Bethel College Concert Choir, Men’s Ensemble and Women’s Chorus and the Newton Community Chorus. Conductors were Bethel music faculty members William Eash (chorus) and Timothy Shade (orchestra). 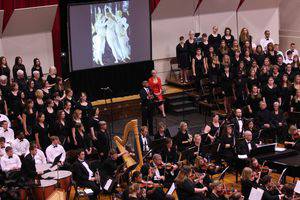 Arthur Marks and Rachel Kasper Fitzsimons during the Broadway portion of the spring Masterworks concert. Photo by Vada Snider

The first half of the Masterworks program was Parts I and II of The Creation. In the second half, Fitzsimons (whose stage name is Rachel de Benedet) and Marks presented selections from Broadway – Nine, The Light in the Piazza and Sunday in the Park with George.

John McCabe-Juhnke ’78, professor of communication arts, and Annette Thornton, director of music theater at Central Michigan University, Mount Pleasant, performed one of the selections from Sunday in the Park with George in speaking roles.

Rachel de Benedet has spent the past 15 years in musical theater on and off Broadway. She appeared in Catch Me if You Can (for which she received an Astaire Award nomination), The Addams Family (Morticia, opposite Nathan Lane), Dirty Rotten Scoundrels (with John Lithgow), Nine (with Antonio Banderas and Chita Rivera) and The Sound of Music, all on Broadway.

She has also received a number of awards and award nominations for her work in touring productions and regional theater, including Adrift in Macao, for which she won the Barrymore Award for Best Actress for the original Philadelphia Theatre Company production. Her current favorite role is as mom to William, who just turned a year old.

Arthur Marks has been performing since 1992 with symphony orchestras and in classical and music theater venues across Europe and the United States. He was the featured soloist for two world premiere pieces by the prolific gospel and spiritual composer M. Roger Holland II at several landmark venues in New York City, including St. Patrick’s Cathedral. He recently made two recordings for GIA Publications, Inc., featuring lectionary psalms (The Revised Grail Psalms).

Marks is the voice of Ugly Duckling in HONK!, which is preserved on the first American cast recording, and had the pleasure of being the opening act for the late, great Ray Charles. He performed alongside actress Ellen Page, daytime talk show host Wendy Williams and Law and Order SVU actress Tamara Tunie in a benefit for the Hoboken (N.J.) Homeless Shelter. He is a proud member of Actors Equity Association.

Doyle Preheim is professor emeritus of music at Goshen (Ind.) College, where he taught for 30 years before retiring in 2003. He has been widely heard as a bass soloist in oratorio roles and has presented solo recitals, with his wife, Mary Jo Preheim, as pianist, in venues in the Midwest and in Canada.

In May 2004, Preheim became director of the Sangre de Cristo Chorale, a Santa Fe-area community choir that he led for eight years, retiring in 2012. He continues to run an active voice studio at his home, and he will be coming to Bethel in spring 2014 as a sabbatical replacement for William Eash.