A “Sweet 16” finish in a 1964 national competition gives reason to celebrate more than a century of mathematics excellence. 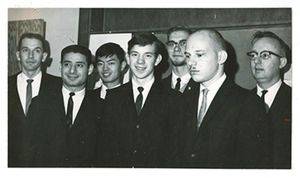 Even if this is Bethel’s 125th year, why celebrate a math achievement that happened in 1964?

Well, look at it this way, said Nathan Bartel ’02 as he introduced Bethel’s Putnam team from that year in convocation March 11. On the cusp of March Madness, the NCAA basketball championship series, think about what it would be like if Bethel College made it to the Sweet 16.

That kind of bracket busting happened in 1964 when the Bethel students taking the notoriously difficult Putnam Exam in mathematics finished No. 14 in the nation, competing with intellectual powerhouses like Harvard, MIT, Caltech, Duke, Stanford and the University of Toronto. 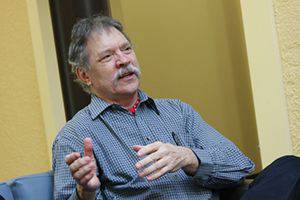 What’s your passion? Gary asked his audience. For people with a passion, mastery is a goal. How do we measure our growth, mastery, skill or understanding? Sometimes we measure it through competition. Today we’re celebrating a competition that showed excellence in mathematics [and] reflects well on a team, individuals, our professors and mentors and the entire campus.

Bethel’s Putnam story begins with Arnold Wedel, who taught at Bethel 1951-94. In his very first calculus class as a Bethel professor, in fall 1951, he had a student named Samir Khabbaz ’54 – who got to Bethel by an even more circuitous route than did Gary, from a Palestinian refugee camp. In the fall of 1953, Samir became the first Bethel student ever to take the Putnam exam. He placed 74th.

Bethel took a Putnam time-out in the latter half of the ’50s. Wedel established the Kansas Intercollegiate Math Contest in 1955, with the first competition in 1956, and continuing for the next decade. How did Bethel do?

We dominated, Gary says. We took first place six times and were never lower than third. There were 10 or more colleges competing.

Bethel had competitive teams over the next four years and then, in the auspicious year of 1964, came in 14th. Those students had exercised their passion for math by getting up for Putnam practice at 6 a.m. every Saturday, inspired by the challenge – and the donuts Professor Wedel brought, Gary said.

He had come to college from upstate New York, a self-described math geek who had never heard of Bethel until a serendipitous meeting with Arnold Wedel in 1964. I had passion, he says, and Bethel looked like a place that would let me pursue it.

He continues, How many small liberal arts colleges can say they made it [to the Putnam Sweet 16]? I do know only three have finished in the Final 4, including Oberlin, which was 4th in 1964, Swarthmore and Harvey Mudd. Kansas State University has never finished as high as Bethel did. The University of Kansas was once in the Final 4. (In 1964, the top five finishers were Caltech, MIT, Harvard, Case Western and University of California-Berkeley.)

Also speaking in the March 11 convo were Ken Graber, who has an M.A. in public administration and management from the University of San Francisco, and Elias Toubassi, who earned his Ph.D. at Lehigh University under Samir Khabbaz. 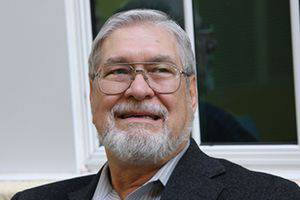 There were no programs in computer science then, Ken remembers. People at that time were recruited by organizations to go into information technology and systems development, so I worked a number of years in systems design for the City of San Francisco and later in the private sector. I was pretty good at programming but I found out I was better at planning, so I moved to team leader and systems manager relatively quickly.

In doing systems design projects, it’s important to have a methodology to systematically solve problems. That’s what I learned on the Putnam team: define the problem; what’s the objective; what are the facts – what you already know; what are the resources; what ideas do you have to put together a solution – is it like something you’ve already solved; and finally take the solution and steps that got you there and put them into a complete package.

Besides math, he says, another skill I learned at Bethel was written communication. I thought I had written my last paper when I graduated, but it turns out managers have to write a lot of reports. They are also responsible for getting the funding for systems development projects – grant proposals have to be convincing to get you the money, not unlike a term paper that needs a convincing argument in order to succeed. So liberal arts is a key factor in success.

In the Putnam, you have to have a meticulously outlined solution, complete and correct from beginning to end, or you won’t get the points. I had a woman who was part of a workplace problem-solving team tell me one time: Mr. Graber, I want to thank you for teaching me how to think. I thank Bethel – this is where I learned how. 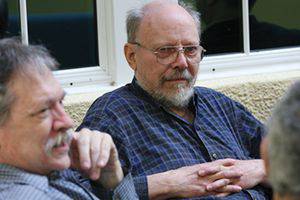 Gary introduced Don Quiring who won a National Science Foundation scholarship for graduate school and got a Ph.D. in mathematics at the University of New Mexico. Don taught for a number of years, then worked in engineering at Boeing in both Wichita and Philadelphia before retiring in 2004.

When Elias took the podium, he gave special recognition to Arnold Wedel, for whom this Putnam reunion was also a celebration.

His dedication and spirit gave us a very strong background in mathematics, Elias says. He was well aware of what it takes to create a top-notch undergraduate mathematics program and he worked hard to keep the innovation going here. His spirit, energy and enthusiasm for 40-plus years made the math program at Bethel so successful. 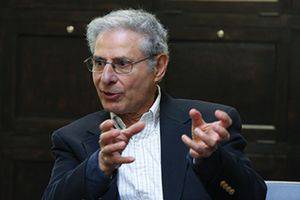 We got the Bethel bump – we succeeded here and then went on to successful careers. We got the tools to go on and do great things.

Reflecting on his Bethel years, Elias says, A lot of things go into making a college experience a huge success – friends, faculty, social events. Bethel certainly did that for me.

If you watch Stephen Colbert [on Comedy Central’s The Colbert Report], he interviews someone and says they will now get the Colbert bump.

Bob Pankratz, Gary says, got an M.S. in modern European history, taught high school math in Colorado and now owns a home construction business in Homer. Silas Law earned an M.A. in math and a Ph.D. in civil engineering at the University of Oklahoma and as far as the others know is still in private business (they were unable to contact him despite repeated efforts).

As for himself, Gary says, I’m testing the proposition that the Bethel bump is all you need – just the B.A. and then you go on and are relatively successful. He has held a wide range of different jobs but spent the past 25 years as a computer programmer, including nearly a decade as chief information officer for the Department of Mental Health for the State of Missouri, retiring in 2010.

Jon got to his first algebra class at UC-Berkeley, Gary says, and basically solved an unsolvable problem. They said, Where’d you learn that? He said, At Bethel. McCammond went on to earn a Ph.D. in near-record time. 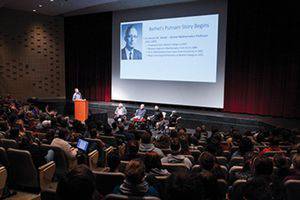 Gary also cites good student enrollment in math classes, driven by other sciences, and the strengths of Bethel’s current math faculty. He notes that Karl Friesen ’86, who is now department chair, has coached strong teams for the ACM North Central Region programming competition in recent years. Gary also credits STEM cooperation on initiatives such as successful grant applications to the National Science Foundation and the growing popularity of the annual Summer Science Institute for high school students.

But perhaps the strongest measure of a program’s excellence is in its graduates. Bethel math alumni, Gary says, have gone on to careers as math researchers, university and college professors, secondary school math teachers, computer programmers, actuaries and industry analysts, engineers, mathematicians and statisticians – not to mention advanced study and work in many other fields.

Ken Graber: I was not interested in sports, even though with my height they kept trying to get me to play basketball. The chess team and Putnam team took the place of sports. They were my recreation.

Elias Toubassi: I remember going to Leonidas’ [a 24-hour coffee shop formerly located in Newton’s train depot] late at night, for pancakes or fresh cinnamon rolls. I remember freezing glasses to the table to tease the waitress. Arnold trusted me with the keys to his house and let us take his car.

Ken: We’d get together and play penny ante poker. It was strictly for research.

Gary Lyndaker: There couldn’t be any pennies or nickels on the table, because that was gambling, so we would use another deck of cards [as the chips].

Ken: We’d constantly challenge each other. One of these was How long to take a million bites? Don [Quiring] offered to count. It took him from 1965 to 1986 to reach a million bites.

Gary: In my last couple of years at the Department of Mental Health, I was bringing online a new [information technology] system. Five years later, it’s going great and people rave about it, but it was hard at the time. During the difficult periods, I would remind myself: I can solve problems. When things got crummy and people were complaining, saying it couldn’t be done, I would tell myself: I can think through this. I can take the criticism.’ That’s what I learned from being on the Putnam team.

Only the best want to try

Putnam is an annual mathematics competition for undergraduate college students in the United States and Canada. It takes place on the first Saturday in December and consists of two three-hour sittings separated by a lunch break.

Faculty members at the participating schools supervise the tests. Each competitor attempts to solve 12 problems, which can typically be solved with only basic knowledge of college math but that require extensive creative thinking. Each question is worth 10 points. The most frequent scores above 0 are 10 points for a complete solution, 9 points for a nearly complete solution and  1 point for the beginnings of a solution.

The examination is considered to be very difficult. Of the 2,500-plus four-year undergraduate institutions in the United States and Canada, fewer than 25 percent field Putnam teams. Students specializing in mathematics are the ones who typically attempt the exam, but the median score is usually only 1 or 2 points out of 120 possible. In 2003, for example, 28 percent of the students taking the exam scored 10 or more points and 42 points was sufficient to make the top 102. As of 2010, there have been only four perfect scores since the competition began in 1938.

Why take such a hard test? Gary Lyndakerasked the March 11 convo audience. Maybe it’s like the challenge of a basketball three-point shooting contest played with a 12-foot goal, no backboard, a smaller rim and shots allowed only from the three-point line. Only the best shooters would want to try.

At a participating college, any student who wishes may compete, but the school’s official team consists of three individuals designated in advance. A team’s score is the sum of the ranks  of its three team members, with the lowest cumulative rank winning.

An example of a Putnam-like problem, as given  by Gary: One day, it began to snow at a heavy and steady rate. A snowplow started out at noon, going 2 miles the first hour and 1 mile the second hour. What time did it start snowing? While this may sound like a joke in need of a punchline, in fact, it’s a problem from a lower-level course in differential equations, which is what you use to solve it.