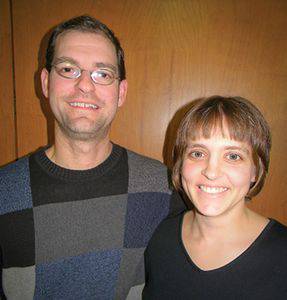 Between them, they run a sustainable organic farm, write and edit for an independent group of advancement professionals and serve as key contributors in a small rural community known for theater and musical productions.

Sherilyn (Graber) Ortman graduated from Bethel in 1998 with a major in music. She completed a German major the following year. Will Ortman graduated in 1999 with majors in music and psychology.

Will is a farmer who runs a diversified organic operation, one of only two in Turner County, S.D., that includes small grains, corn, soybeans, edible dry beans, beef cattle, laying hens, potatoes, off-season indoor produce, strawberries, raspberries and other things depending on the year, he says.

He is a local expert and presenter on sustainable farming, local foods, peak oil and revitalizing rural communities through agriculture. His presentations in the past year have included a workshop at the Central Plains Mennonite Conference annual meeting in Henderson, Neb., on The Rural Church as Community Leader, and a panel at the Faith and Farming conference at Crooked Creek Christian Camp in Iowa, among others.

Will is also the founder of the Table Leaf Alliance, an organization of local producers and consumers dedicated to building a local foods system in the Freeman (S.D.) community.

Both are accomplished musicians – Will as a composer and conductor, Sherilyn as a conductor, accompanist and piano teacher.

Will’s oratorio Jesus the man, the Christ premiered in Freeman in 2002 and was performed at the 2003 Mennonite Church USA convention in Atlanta. Another original oratorio, Darkness in the Garden, premiered this Easter in Freeman and Sioux Falls.

He has written close to 20 other choral works, including commissions from individuals, local churches and high school choirs. He wrote pieces to commemorate a 50th anniversary for a couple in Ohio and, in 2007, for Salem-Zion Mennonite Church in Freeman.

Will is active in local theater, having directed or acted in 14 plays and musicals since college, including several times as part of Freeman’s annual Schmeckfest, and is a founding member of the Ghostlight Players, a local traveling drama troupe.

Sherilyn has given private piano instruction since 1998. She was the creative arts coordinator at Freeman Academy from 2003-05.

In 2000, she coordinated the Mennonite Secondary Education Council Choir Festival that Freeman hosted, when approximately 500 high school students spend three days at the host institution with a guest conductor, presenting a concert at the end. Sherilyn also organized the Freeman Area Music Camp in both 2000 and 2001.

Both Sherilyn and Will have been active in their congregation, Salem-Zion Mennonite Church, in numerous ways, as music and choir leaders, Sunday school teachers and committee members.

Among Sherilyn’s contributions to Central Plains Mennonite Conference are serving as a board member-at-large through 2013, serving on the Editorial Reference Council and being a contributing reporter/writer for the conference newsletter.

She is one of the writing team members for the Mennonite Church USA Advent materials for 2013 and has contributed articles to Purpose magazine and Mennonite World Review.

She has also been part of multiple Schmeckfest musical presentations, as a performer, orchestra conductor or chorus director; has published in Keyboard Companion, a leading piano pedagogy journal; collaborated with Mory Ortman ’94 in two-piano recitals in South Dakota and Kansas; and regularly serves as a choir conductor and choral and instrumental accompanist for numerous workshops and recitals locally.

The Ortmans’ convocation presentation was April 12 in Krehbiel Auditorium.

The Awards Committee of the Bethel College Alumni Association names one or more Young Alumnus Award winners each year. The Young Alumnus Award recognizes character and citizenship, achievement or service rendered, and honors and recognition received. The recipient must be 39 years of age or younger and present a convocation  program for Bethel students, faculty  and staff.