Justina Neufeld, North Newton, Bethel College’s 2013 Outstanding Alumnus, was a pioneer in mental health care who, in the 15 years since retirement, has undertaken a whole new vocation: uncovering and writing her family’s history. 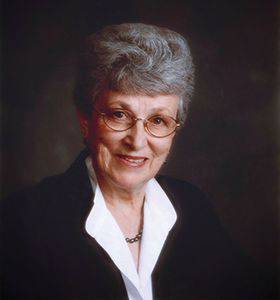 Neufeld was born in the Mennonite colony of Gnadenthal in what is now Ukraine, the youngest of 10 children of Anna and Dietrich Neufeld. In 1943, Neufeld along with what was left of her family fled communism as the German army retreated.

Neufeld was permanently separated from her mother at age 13, when Anna Neufeld sent Justina to visit relatives in France. Neufeld came to the United States in 1947 when a family in the Mountain Lake, Minn., community sponsored her.

She moved to Newton in 1952 to train as a nurse at Bethel Deaconess Hospital. After receiving Registered Nurse status, she went immediately to Bethel College and graduated with a B.S. in nursing in 1957. She later earned an M.A. in gerontology from Wichita State University.

Following graduation from Bethel, Neufeld served two short terms of voluntary service in The Pas, Manitoba, and London, Ontario, before taking a position at Chicago University Hospital as a staff nurse. She did that for one year before moving to Toronto (Ontario) General Hospital for a year.

In 1959, she returned to Newton to work as a staff nurse at Prairie View Mental Hospital, with a commitment of one year. She retired from Prairie View Mental Health Services 39 years later, in 1998, after serving as a staff nurse, acting director of nursing, community mental health nurse, director of the adult and adolescent day hospital and, finally, as special projects director.

At the time of her retirement, Neufeld reflected on some of the changes she had seen in the field of behavioral and psychiatric medicine.

Among the most dramatic: the development, in the mid-1950s, of psychotropic drugs that controlled symptoms of mental illness and allowed patients who had been institutionalized to return home.

This resulted in the establishment of community mental health programs, through which Neufeld became one of the first community mental health nurses in south central Kansas. She worked with psychologists, social workers, educators and the courts to design the support systems that patients returning to homes and communities needed.

In 1969, Kansas Governor Robert Docking appointed Neufeld to a three-month assignment as a consultant in community mental health to the School of Nursing at the National University of Asunción, Paraguay, as part of the Kansas-Paraguay Partners initiative.

In 1972, Neufeld’s article The Role of the Community Health Nurse in a Rural Setting was published in Community Mental Health Nursing. She has presented papers at national mental health conferences, including one sponsored by the National Institute of Mental Health.

She was inducted into Sigma Theta Tau, the international nurses’ honor society, in 1986; was named a Woman of the Year by The Newton Kansan in 1978; received the Kansas State Nurses Association Individual Membership Award in 1989; was named AAUW’s Newton Area Outstanding Branch Member in 2009; and received an AAUW Certificate of Recognition in 2012.

After she retired, Neufeld turned her attention more fully to memories she had long put into the back of the closet, of her harrowing experiences fleeing Stalinist Russia in 1943.

In 1941, when Neufeld was 10, her father was taken away in the midst of the war between Germany and Russia, and never heard from again. Over the next years, the family was further divided until at last Neufeld, with her brother Gerhard and his family, made her way to Mountain Lake.

It took Neufeld nearly 60 years to be able to begin writing about her childhood experiences. In 2003, she published a memoir, A Family Torn Apart (Kitchener, Ontario: Pandora Press).

Rachel Waltner Goossen ’82, in a 2004 review of the book for Mennonite Historical Bulletin, wrote: The experiences of her past – of the family’s dispersion across North America, Europe and parts of Asia – have until now been mostly privately held memories. In this book, however, her experiences – and by extension the terror experienced by many European Mennonites in that time – are shared for a broader reading audience.

A Family Torn Apart is Justina’s unflinching tribute to her parents and her eight older brothers, sister and great-aunt, Tante, who lived with the Neufeld family as their world shattered in 1941.

These days, Neufeld stays busy as a long-time member of a writers’ group, a knitter of prayer shawls, a promoter and practitioner of exercise for good health and an active member of Bethel College Mennonite Church. She has been married to Floyd Bartel ’53 since 1995.

Neufeld and other alumni award winners will be honored at the annual Alumni Banquet Saturday, May 18, at 6 p.m. in Memorial Hall.