The woman at the center of the story

With her young adult novel, Magpie’s Blanket, Kim Schmidt helps to recover a piece of Native American history told from a female perspective. 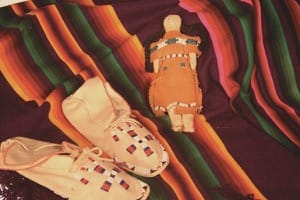 You can’t refuse a peace chief.

That was what Kimberly D. Schmidt ’84, Hyattsville, Maryland, decided.

The peace chief in question was Lawrence Hart ’61 of the Southern Cheyenne. In 2003, planning was underway for a major academic conference to be held in Clinton, Oklahoma, March 30-April 1, 2006. “Journey from Darlington” looked at multiple facets of the history of the relationship between Mennonites and the Southern Cheyenne and Arapaho in Oklahoma, dating from the 1880s.

Kim, as a member of the Historical Committee of Mennonite Church USA, went to a meeting in Clinton in 2003 where some of the first planning for “Journey from Darlington” took place. While she was there, Betty Hart ’57 and Raylene Hinz-Penner ’70 (author of the 2007 Cascadia Press book Searching for Sacred Ground: The Journey of Chief Lawrence Hart, Mennonite) “came up to me in a parking lot and said, ‘Lawrence wants you to write a women’s history of the Southern Cheyenne for the conference.’ 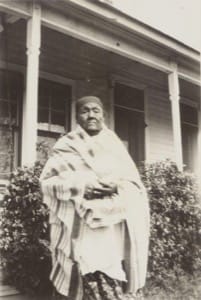 Ape Walker, an elderly Cheyenne woman, in front of the home of J.B. and Agatha (Regier) Ediger, Clinton, Oklahoma, ca. 1935

“I wondered, ‘Why are they tapping me?’ I think it was because Lawrence and Betty know my parents [Charlotte ’57 and Mel ’59 Schmidt]—a typical ‘Mennonite Game’ thing. They watched me grow up. I knew Connie [Hart Yellowman ’80] and Nathan [Hart ’83] here at Bethel.

“I was standing in that parking lot saying, ‘I can’t do it, I’m not trained [in this area]—I don’t know the major historical themes.’ They said, ‘Oh, don’t worry, we’ll help you.’ I decided one really can’t say no to a peace chief.”

Kim is a professor of history at Eastern Mennonite University and directs EMU’s Washington Community Scholars Center. She has a Ph.D. in history from Binghamton (New York) University and, until recently, has concentrated her research on Amish and Mennonite women’s social history.

She went on with her other academic writing, still mostly circling the topic of Southern Cheyenne women until “finally in 2012 or 2013 somewhere, I decided, ‘That’s it, this has to become real.’”

All along, however, something had troubled her: “How do you write a history of [Native] women when all the documents are written by white men?”

She also discovered she was “interested in trying to write something more poetic. Sometimes poetry captures the emotional impact better when you are trying to write about some of the traumatic events in our history.”

In the nearly 10 years since Betty and Raylene had first approached her, Kim had had some trauma in her own life.

“I went through cancer and divorce at the same time,” she says. “I had this huge life transition, an upheaval. I really relied on the arts to get me through. I started writing poetry during this time. I was trying to see and find beauty in order to make it through.

“That’s a lot of what led to wanting to write something I could experience on a deeper level. In history as written for academics, it’s hard to find emotion. You’re not going for emotional impact and sometimes you’re considered a lightweight if you do.”

The combination of wanting to tell the story through a woman’s eyes and to do it in a more literary way led Kim to create the character of Magpie, a young Southern Cheyenne woman just coming of age in 1868, and to the young adult novel Magpie’s Blanket, published by the University of New Mexico Press earlier this year. 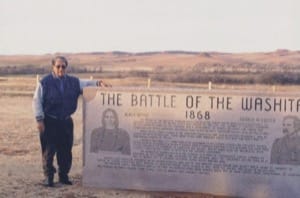 Lawrence Hart at the Washita Massacre site near Clinton, Oklahoma, in January 2000

From victim to healing agent

At that 2003 meeting in Clinton, Kim had an experience she never forgot, and which became the prologue to Magpie’s Blanket.

Lawrence took the group of historians out to the Washita Battlefield. On Nov. 27, 1868, Lieutenant Colonel George Armstrong Custer led the 7th Cavalry against a band of Cheyenne camped on the banks of the Washita River, whose leader was the peace chief Black Kettle. They destroyed the village and massacred 103 women, children and men, including Black Kettle. It was 48 hours short of being four years to the day (Nov. 29, 1864) that Col. J.M. Chivington and his troops attacked Black Kettle’s village on the banks of Sand Creek in eastern Colorado. In both cases, the village was supposedly under the protection of the U.S. Army and flying a white flag indicating it was peaceful.

That day at the Washita, “Lawrence stood where Custer supposedly had stood and given his battle commands,” Kim says. “Lawrence sang to the four winds. And then he told the stories of Washita and Sand Creek. His power and eloquence in that location transfixed all of us.”

There was a more modern component to the story as well. In 1968, the Cheyenne of Oklahoma reluctantly agreed to participate with the Grandsons of the 7th Cavalry in a centennial reenactment of the so-called Battle of the Washita. However, the experience of the reenactors rushing in on horseback, firing blanks and playing their battle song, “Garryowen,” became deeply and unexpectedly traumatic for the Cheyenne. Trying to decide how to respond, their young peace chief, Lawrence Hart, later that day led his people in a reconciliation ceremony in which they gave the leader of the Grandsons of the 7th Cavalry a special blanket.

“I was so compelled by the stories of Washita and of the reconciliation and healing ceremony that happens 100 years later, for which Lawrence was a vital part,” Kim says. “I’ve been reading Native American history since the 8th grade, and I had never heard of Washita or the healing ceremony.

“Some time later, my daughter was reading [a popular young adult series] about an insecure person who has no confidence in herself and falls in love with this cold, literally remote person who ‘saves’ her because she can’t save herself.

“The Cheyenne picture of womanhood, the vision for womanhood, is completely different. When coming of age, they are autonomous, powerful and make their own choices. They can reject the man if they don’t want him.

“Magpie’s Blanket is a story of a young woman coming of age at a time when the old world is gone and her tribe is being systematically destroyed. How do you move forward in a context like that?”

From dream to reality

As promised, Kim got help writing the story from the Harts and Raylene, from her sister Johnna Schmidt, a creative writing teacher at the University of Maryland, and from two other women intimately connected to the Southern Cheyenne.

Lawrence introduced Kim to Henrietta Mann, who was then president of Cheyenne & Arapaho Tribal College, Weatherford, Oklahoma. Henrietta and Lawrence, who are the same age, are both descendants of survivors of the Washita Massacre. Their family stories deeply inform Magpie’s Blanket.

Kim Schmidt at the presentation she made about her novel Magpie’s Blanket at Kauffman Museum during Fall Festival. The book is available for purchase at the museum store.

Later, Kim met Henrietta’s daughter-in-law, Jennifer Whiteman (both their names appear on the cover of Magpie’s Blanket, Jennifer for her help with the writing, Henrietta for the Foreword). “Jennifer and Henrietta would read sections and tell me what I needed to add or when I didn’t quite get it right,” Kim says.

Though Magpie is a fictional character, she is based partly on White Buffalo Woman, Henrietta’s great-grandmother. White Buffalo Woman survived both Sand Creek and Washita and lived into her 90s, but never slept without her moccasins on, in case she needed to run at a moment’s notice.

“There were two historical Magpies,” Kim says. “One was male, and fought Custer both at Washita and [later] at the Little Big Horn. One was female—she also survived both massacres but was older than my Magpie.”

Kim also credits the Mennonite Library and Archives at Bethel for being essential to the writing of the novel. “There are amazing photos in the MLA, huge collections of photos taken by missionaries such as Anna Hirschler Linscheid and the Petter family,” she says. “Those representations were also great sources of inspiration for the novel. The photos show how the people dressed and how they carried themselves. They show how women carried their babies. There are a lot of formal portraits but also everyday pictures as well, that contain a lot of information.”

Magpie’s Blanket continues to receive favorable reviews, and Kim keeps doing occasional readings and book signings in her local area, with all book proceeds going to the Cheyenne Cultural Center in Clinton. She has hopes of getting the book into some high school classrooms—the 150th anniversary of the Washita Massacre is coming up in 2018.

“As far as I know, there is no history of the genocide [of Native Americans] written from a woman’s perspective, even though women and children were the primary victims,” Kim says. “This novel places women’s experience and tribal culture at the center of the story.”