Rashaka Lucas has been learning about aspects of wellness across the lifespan, in his connections with his host family and with senior citizens in a water aerobics class he leads. 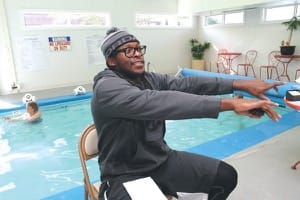 In his relatively short time at Bethel, senior Rashaka Lucas—who’s known for his smile—has found himself bridging several generations.

Shaka, as his friends call him, came to Bethel as a junior from Mendocino (California) College to play football and earn a degree in health and physical education. One of the first new relationships he built was with the family of Jonathan ’96 and Dianna ’98 Funk and their three children, of Hesston, who “adopted” Shaka as part of Bethel’s Host Family Program.

Jonathan, vice president of human resources and marketing for Bluestem Communities, parent company for Kidron-Bethel Village in North Newton, was the one who got Shaka integrated into life at Kidron-Bethel as a way to help build his resume and expand his options once he finishes college.

“Jonathan has been giving me great advice and mentoring me since I met him,” Shaka says. “He encouraged me to add an emphasis in marketing [to the H&PE degree].”

“I was looking at what could complement that degree,” Jonathan says. “This past summer, Shaka worked half-time with Tony Helfrich at the Wellness Center and half-time with the grounds crew. I also helped with an internship in marketing, under Lindsey Thiessen [Bluestem’s marketing director].”

Within that internship, Shaka did a lot of shadowing, attending events and helping with some of them, such as the fundraising golf tournament, and seeing all the entities that fall under the Bluestem umbrella. “I went to a lot of meetings,” he says, and Jonathan points out, “He’s been building a lot of contacts in the community.” 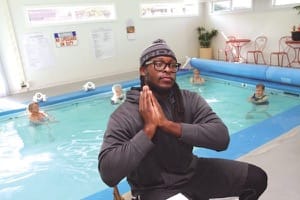 The connection to Kidron-Bethel also put Shaka into a new area of wellness and physical activity—the Wellness Center’s arthritis class in water aerobics. In the group of about seven women who come to the class two to three days a week are several who have been doing it for longer than Shaka’s been alive.

Up until this summer, the class teacher for the past decade was Lucy Pritchett, a Kidron-Bethel resident in her 90s who has been at the facility about 13 years. She came from Cottonwood Falls, where she used to give swimming lessons to kids through the Red Cross.

“About 10 years ago, my friend’s son who taught the water aerobics class got sick and they couldn’t find another teacher,” Lucy says. “So I volunteered. Then this summer my kids told me: ‘Mother, it’s time to retire.’”

Tony Helfrich, Wellness Center director, convinced Shaka to give it a try, even though water activities aren’t his area of expertise, and he was about as different from his “students” as he could be.

“I trained Shaka, and he caught on real fast,” Lucy says. “I showed him what I did, he followed me around, and it didn’t take him long to catch on.”

“I have learned a lot from working with older people,” Shaka says. “I’ve been inspired to do my senior seminar on lifetime wellness and on the benefits of wellness as you get older.” These go beyond the physical, he says— the social aspects are just as important.

“I’ve learned from them to keep pushing,” he continues. “Many of them have joint replacements, but they keep working at it. They’re very positive. They accepted me as their teacher with open arms. They said I had ‘the knack,’ and it’s helped me become more confident.”

“He has a nice, loud voice that carries well,” says Bonnie Krehbiel ’69 of North Newton, who’s been doing arthritis aerobics for 25 years. “We don’t have any trouble hearing him over our chatter.”

“He has a great sense of humor,” says Frankie Huxman, Newton, and Lucy adds, “He pretends not to listen to us [talk] but you know he does—you can see the grin on his face.”

“It’s great to have someone from the younger generation [leading us],” says Frankie, “with that young football energy.”

“I see it as a way to connect different generations and different cultures,” says Denise Krase, administrative assistant in the academic affairs office. “I’ve formed friendships with different students from different places, and it’s important to me that they find other connections in the community, too.

“When Shaka came by this summer to tell me what he was doing [with the water aerobics class], he had the sweetest grin. And when I said, ‘That’s such a cool story,’ he just lit up. It really touched me that he’s been able to span all these areas.”

“As a host family, we enjoy having him around,” says Jonathan. “This has been our first experience in the program.

“Our son is a freshman in high school and we were looking for someone who could be a mentor for him in sports, and show him, this is what it’s like to be a student at Bethel.

“When Shaka says things to them about wellness, the kids pay attention to him when they wouldn’t to their parents. As much as we’re helping him, he’s helping us.”