Revelations in wood—65 years of the sculpture of John Gaeddert

When making their rounds of the Green, regular Fall Festival-goers have come to expect to see John Gaeddert ’50 next to a table of striking wooden sculpture (in Osage orange, bristlecone pine, black walnut and other woods native to Kansas and Colorado) on the east side under an oak tree. And no wonder—because he was there for at least 35 years. 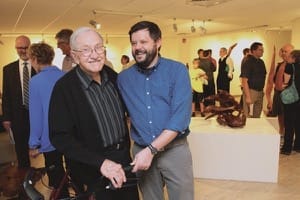 With his physical abilities fading, and “knowing much of his best work was behind him,” says his grandson Nathan Bartel ’02, John told his family that Fall Festival 2015 would be his last to have a table under the oak.

“I took the Fall Festival Saturday to check with family and friends [who owned Gaeddert pieces] to see what they thought” of proposing an exhibit for 2016 “as a way to transition away from the sale table.” Responses were favorable—and then Nathan happened to run into Rachel Epp Buller ’96, associate professor of visual art and design and the director of the Regier Art Gallery in Luyken Fine Arts Center. 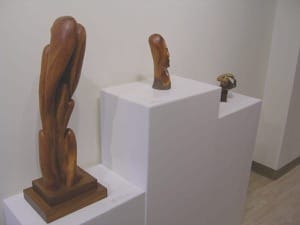 “What would you think of an exhibit of my grandfather’s work in the gallery next year?” Nathan said, and Rachel responded, “I was just thinking that same thing.”

Nathan curated the exhibit, “Revelations in Wood: The Sculpture of John Gaeddert, 1950-2015,” which opened with a reception on Sept. 30, the Friday night of Fall Festival, and was in the gallery through the end of October.

The three children and four grandchildren of John and Mary ’52 Gaeddert loaned pieces for the exhibit (and all were there for the opening, along with his one great-grandchild). “Many of his best pieces belong to family members,” says Nathan, adding that they represent important milestones such as weddings, baptisms and family Christmases. 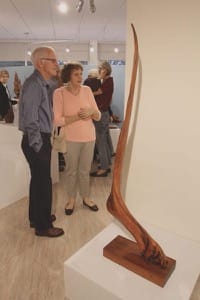 Several Bethel alumni loaned pieces as well. “One of the best things about the exhibit,” says Nathan, “was hearing people talk about Gaeddert pieces—they own one or someone they know does or it’s in their church—and their relationship with it.”

“Wood is everyday, the material for our structures and the fuel for our fire,” John wrote in his artist statement for the exhibit. “And yet, despite how common wood is, it holds a fascination all its own. It twists and turns, recounting its life in its broken branches and its varied rings. Here a fire that swept through the countryside. Here a dry year, here a year with much rain. Wood reveals our shared history because it is common, because it is watchful by nature. Revelatory—we see ourselves and our world written down in the eternal dance of the tree.”

“In much of [John’s] work, the process is a voyage,” his longtime friend Bob Regier ’52 wrote, recalling words of art critic Dore Ashton. “The harbor has been left. No predetermined port has been selected. His dialogue with wood will eventually determine the place of arrival. That risk, that adventure, that discovery is the spark that energizes his work.” 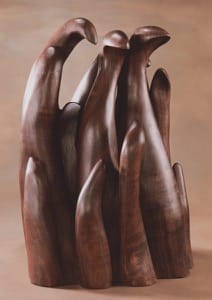 “All in a family,” black walnut, courtesy of Adam Gaeddert ’07 and Rebecca Woodruff. 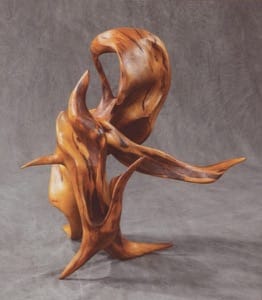 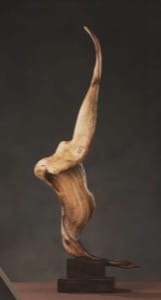 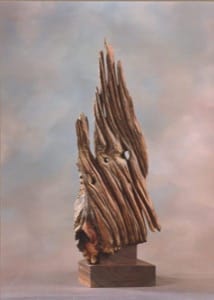