According to the numbers, Bethel’s 1976 volleyball team was one of the most dominant in school history. 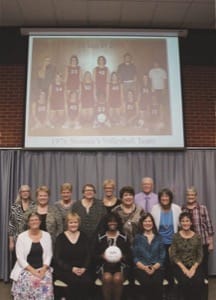 They had a perfect record in the Kansas Collegiate Athletic Conference of 14-0 and a winning streak of 26 matches, holding all but two opponents to fewer than 10 points. The Threshers won the Kansas small-college championship, and made it to the regional championships, ending the season with a 37-3 match record and a 74-7 set record.

The team came together—11 players, coach Barb Anderson Graber, assistant coach Rich Harder ’76 and student manager Sheri Unruh Campos ’78—to celebrate their induction into the Bethel College Athletic Boosters Hall of Fame at the 4th annual Booster Club Banquet, Sept. 30 during Fall Festival. It was the first time all 14 had been in the same place at the same time in close to 40 years. It was almost 40 years to the day—Sept. 28, 1976—this team played (and won) its first match.

Both Graber and the 1976 team captain, Cynthia Habegger Loganbill ’77, spoke at the Booster Club recognition, with plenty of praise for the team’s athleticism and determination. But there was a lot of gratitude for team cohesiveness and fan support as well.

Title IX was in its infancy—the KCAC had recognized women’s sports in 1975, which was the first year Bethel had a volleyball team (and won the first-ever KCAC championship).

“Fans were as new to the sport as the players,” Loganbill noted. “We had to have it explained: bumping, digging, spiking, serving, setting; how you scored, which was only when serving; that you had to win by two.”

Nonetheless, “we were surprised by the turnout of fans” at the first match, she said. And that support never wavered, even when the team was on the road.

When the team traveled to Brookings, South Dakota, for the regional championships in 1976, they made an overnight stop in Freeman. “It was the most exciting thing that had happened there since a dog got into a herd of sheep and killed 13,” Loganbill said. “Twenty-three people came to help [with the sheep], but 43 turned out to watch the Bethel volleyball team practice.”

All joking aside, there was much appreciation expressed for fan support, from faculty and students as well as the team’s families. Only one player came to Bethel from outside a 30-mile radius—Marcia Kroeker Miller ’78, all the way from Enid, Oklahoma.

“I feel very fortunate to have been part of this team’s journey,” Graber said. “They had no idea how good they were—but teamwork was at the heart of their success. They shared a common goal of wanting to be the best. They were the fiercest competitors I ever coached.”

“We loved to play,” said Loganbill. “We had excellent chemistry. There was very little drama, no diva behavior.

“A huge thanks to Coach Barb for getting the best out of all of us. We [also] benefited from an incredibly supportive fan base.”

“I wish all our recruits could meet this group,” said Kent Allshouse, athletic director, in his closing remarks at the recognition banquet. “We often hear that Bethel is ‘too small’—but you had the determination and drive to smash through all the barriers.”