Bethel celebrated the release this fall of two books in its Wedel Series, produced by the Mennonite Library and Archives (MLA). 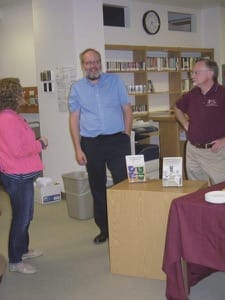 Mark Jantzen, left, and John Thiesen at the celebration for the publication of a book they co-edited with Mary Sprunger and published in Bethel’s Wedel Series

Mark Jantzen ’85, professor of history, and John D. Thiesen ’82, co-director of libraries, are editors, along with Mary S. Sprunger ’84 of Eastern Mennonite University, of European Mennonites and the Challenge of Modernity over Five Centuries: Contributors, Detractors and Adapters.

The book grew from an international conference, “Marginal or Mainstream?: Mennonites, Anabaptists and Modernity in Eastern Europe,” held at Bethel in June 2010.

The conference and the book resulted from the fact that “early Anabaptists are taught in general history surveys, but only for about a decade or two [1525-45]. Apparently, they become irrelevant after that,” Jantzen said.

For years, scholars have been trying to decide if the Anabaptists were merely at the margins, or smack in the center, of the social, political and theological issues of most concern in Europe over the past five centuries. “There are many scholars trying to come up with the answer,” Jantzen said, “often disagreeing but fruitful in the disagreement.”

Speaking at a book-launching party for European Mennonites and the Challenge of Modernity, held in the MLA, Jantzen called the volume’s subtitle “organizational.” The published conference papers are divided according to whether the presenters consider Anabaptists to be contributors, detractors or adapters to or from modernity.

The book’s contributors come from colleges, universities and seminaries across the United States and Canada, as well as Germany, the Netherlands, Ukraine and Uzbekistan.

A People of Two Kingdoms II

The other new book in the Wedel Series leaves no doubt that Mennonites (the largest existing group of Anabaptist origin in North America) are right in the middle of modern political issues, most particularly in Kansas.

James C. Juhnke ’62, Bethel professor emeritus of history, is the author of A People of Two Kingdoms II: Stories of Kansas Mennonites in Politics.

Juhnke, introducing his book at an afternoon gathering at the Kidron-Bethel retirement community in North Newton, noted that his first book, A People of Two Kingdoms (which began as his Ph.D. dissertation), came at the beginning of his career and the most recent one at the end, yet with more than 40 years between them they still had the same graphic designer—John M. Hiebert ‘58, now retired from 50 years at Mennonite Press.

A People of Two Kingdoms: The Political Acculturation of Kansas Mennonites (published in 1975) was intended to cover “up to the present,” Juhnke said. But by the time he got through World War II, it was clear there was too much material for a dissertation, or for one book.

“Four or five years ago, I started working in earnest on A People of Two Kingdoms II,” Juhnke said. “Perry Bush’s Two Kingdoms, Two Loyalties covered the topic so well, I almost decided [to give it up]—but sometimes you can’t let go of an idea.”

“I’m always asked, ‘When did Kansas Mennonites get involved in politics?’” Juhnke continued. “The answer for Mennonites in general is usually ‘World War II and [Civilian Public Service].’ But for Kansas Mennonites, it was ‘From the beginning [in the 1870s].’”

The first Kansas Mennonite to be elected to the state legislature, however, was Newton businessman Henry Peter Krehbiel, in 1908.

A People of Two Kingdoms II starts where the first volume left off, in 1940, and works through the social and economic contexts Kansans faced and which pulled some of them into politics—from conscientious objection in World War II to active dissent against the Vietnam War, from the Civil Rights Movement to the farm crisis of the 1980s, and finally to the anti-abortion “Summer of Mercy” (1991) and the recent push to legalize same-sex marriage.

Juhnke devotes one chapter to his own (unsuccessful) run for national office, the Congressional seat in the 4th District, in 1970—nearly the centennial of Mennonites first coming to Kansas from Russia.

He also briefly profiles a number of other Mennonite and Mennonite-connected politicians, from Steve Becker, Buhler, a dedicated opponent of the death penalty (along with Carolyn McGinn, a Catholic with strong backing from Harvey County Mennonites), to Judy Loganbill ’75, Wichita, who was proud to be the only elementary school teacher in the Kansas legislature over her 12 years in the Kansas House of Representatives, to Duane Goossen ’78, Topeka, who served 14 years in the state legislature and was state budget director for 12 years, in both Republican and Democratic administrations, and whom Juhnke called “probably the most powerful, influential Democrat in the state today.”

Both European Mennonites and the Challenge of Modernity over Five Centuries and A People of Two Kingdoms II are available for sale at Thresher Shop in Schultz Student Center, at the Kauffman Museum store, in the MLA or on Amazon.com (including electronic versions).