The late Wichita teacher and print-maker John Boyd’s work has been displayed in Bethel College’s art gallery several times, and now some of that work has a permanent home at Bethel. 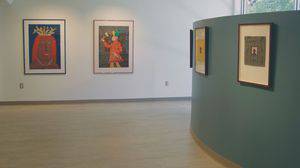 This photo, taken Fall 2014 when Five Decades of Fun—The Artwork of John David Boyd was on display in the Regier Gallery in Luyken Fine Arts Center, shows some of the work that Boyd’s family later donated to Bethel College. Photo by Melanie Zuercher.

Lorraine Boyd and two of her children, Alice and Sara, have donated eight of John Boyd’s prints, part of the exhibit Five Decades of Fun— The Artwork of John David Boyd, which hung in the gallery in the Fine Arts Center Aug. 22–Sept. 19.

The former FAC Gallery was renamed this summer in honor of Bethel Professor Emeritus of Art Bob Regier ‘52. The Boyd exhibit was the first in the newly and extensively renovated space—fittingly so, as Boyd and Regier were good friends.

John [Boyd], who passed away two years ago, was a printmaking professor at WSU for many years and had a profound influence on his students and on printmakers near and far, said Rachel Epp Buller ’96, Bethel assistant professor of art, gallery coordinator and herself a print maker.

At the closing reception for the exhibit Sept. 18, we learned that John’s family wished to donate half of the works on display to the college. Most of the rest of the pieces in the exhibit were already in private collections.

They were very complimentary about the new gallery space and about how John’s work looked in it, Epp Buller continued, and they were thrilled at the number of students who showed up to enjoy the show that evening.

John Boyd began teaching at Wichita State University in 1972 and retired in 2008. He died in October 2012 at the age of 73 from complications of myasthenia gravis.

His imagery is usually drawn from his surroundings, for instance pets, family and his interests in music, art and literature, Johnson wrote. Often, there is reference to the struggle between good and evil in individuals and environments.

Stylistically, there is a flat, almost cartoon-like quality to his imagery that can be seen as a merging of his Ozark roots and the counter-culture comics of Southern California in the 1960s.

Although lithography was his specialty, John Boyd was an expert at all printmaking techniques, often combining them in his work.

John’s work will be an excellent teaching resource for our students and will greatly add to the college’s art collection, Epp Buller said.

We’ve already selected a piece for display in the art building.