The name that now appears on the Fine Arts Center may not be immediately familiar to many, even Mennonites. 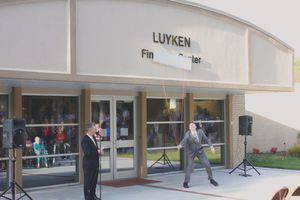 Jacob Miller pulls off the board to reveal the new name of the Luyken Fine Arts Center while President Perry White looks on. Photo by Vada Snider.

However, a good percentage of Mennonites will recognize the work of Jan Luyken, a 17th-century Dutch engraver and illustrator, whose 104 copper etchings illustrated the 1685 edition of the Martyrs Mirror.

Until 2011, only 30 of Luyken’s plates were known to be still extant. Those 30 are at Bethel’s Kauffman Museum, part of the exhibit Mirror of the Martyrs.

Another plate came to light in Germany in 2011. It is on display at the museum through the end of this year.

Following two years of extensive renovation to the Fine Arts Center, Bethel advancement and development staff hosted a re-dedication of the facility Oct. 18 during Fall Festival.  At that time, the new name was unveiled: Luyken Fine Arts Center.

The name resulted from a significant, but anonymous, gift to the renovation efforts.

A brief re-dedication ceremony took place on the Molex Plaza in front of the building. 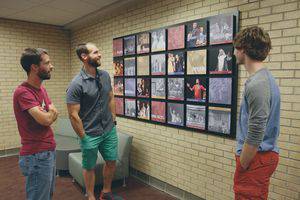 From left, Greg Shelly ’11, Wichita, Andy Findley ’09, Elkhart, Indiana, and current student Matthew Rodenberg enjoy one of the new photo boards in the Luyken Fine Arts Center, in the Theater area—Andy had found himself in the photo from The Fantasticks on the top, second from right. Photo by Vada Snider.

Karen Bauman Schlabaugh, chair of the music department, spoke on behalf of faculty from the programs housed in the Fine Arts Center, and Jacob Miller, Bethel sophomore and member of the forensics squad, represented the students.

Then Miller pulled the cardboard off the sign over the FAC’s front entrance to reveal its new name.

Visitors were encouraged to tour the building and look at the fresh furnishings and updated areas.

There are five pods within the circular building, with photos and timelines that highlight forensics, choral music, instrumental music and theater, as well as emeritus faculty in those areas plus visual arts.

The art gallery, now named in honor of Professor Emeritus of Art Robert W. Regier ’52, has been completely redone. 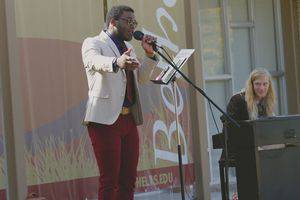 Gifts from First Bank of Newton and the Bethel College Women’s Association resulted in a refurbished box office and kitchenette (used for receptions), respectively.

Outside, Fall Festival visitors celebrated the new Prairie Sky Stage on the northwest side of the FAC, enjoying poetry reading by Bethel students and by Siobhán Scarry, visiting assistant professor of literary studies, who recently published Pilgrimly, a book of poetry, along with a cappella and acoustic music from students—two vocal groups and a blues duo.