What the Journey Serves

Going outside your own country and culture is not only enriching for students who take travel courses—professors find it invigorating, too. 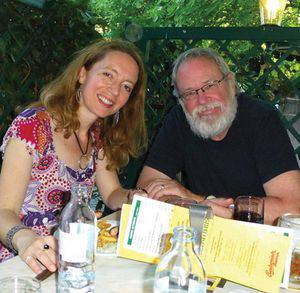 Rachel Epp Buller and her family met Paul and Diane Lewis in Vienna at the Prater, where Daniel, Daisy and Lucy Buller enjoyed the amusement park and they all shared a meal. Photo by Tim Buller.

At Bethel most recently, Paul Lewis, professor of psychology, and Rachel Epp Buller ’96, assistant professor of visual art and design, found this to be true of trips each took to Europe in spring/summer 2013. Rachel and her family were in Berlin for June and July. Paul, on sabbatical for the 2013 interterm and spring semester, spent May and June in Vienna along with his wife, Diane.

Paul’s area of research in the past several years has focused on schizophrenia. I wanted to follow up on some connections I had made [at conferences] at the University of Vienna, in research on schizophrenia. This represents the first leg of a new research direction for me, on the stigmatization of mental illness, which stems from my becoming the adviser for the Bethel chapter of NAMI [National Alliance on Mental Illness], with its goal of de stigmatizing.

Paul was most interested in connecting with Ingrid Sibitz and Claus Lamm at the University of Vienna. Sibitz, on the staff of the university’s medical school, is interested in self-stigmatization [by those with mental illness] and how that relates to the severity of illness and recovery times. 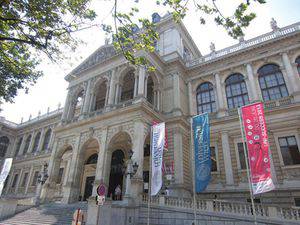 Lamm has a doctorate from the University of Vienna in socio-neuroscience and is now a vice dean. Paul noted an interesting Bethel connection —Lamm did his third post-doctoral fellowship at the University of Chicago in the labs of John Cacioppo, where Louise Hawkley ’95 is the director of labs. These are the kinds of connections that can make for future collaboration.

During his two months in Vienna, Paul also taught a Schizophrenia and Mind class to a small class (6–8) of primarily graduate students.

I was going anyway, so on the spur of the moment, I worked up a letter of introduction and a vita and sent them to the human resources director, who forwarded them on to the dean. Though the University of Vienna Medical School has faculty specializing in schizophrenia, the broader psychology faculty had no one with that interest.

I did it gratis, Paul says. So I guess you could say this was a service trip.

When Paul Lewis went to a conference in Athens, he and his wife Diane took an Aegean Sea sightseeing cruise —and met on the boat, via serendipity, Bethel students Jennifer Scott, left, and Kaitlyn Preheim. When the travel course they had wanted to take was cancelled because of low enrollment, the two went anyway. Photo by Paul Lewis.

Rachel was in Berlin to continue the research on Alice Lex that she focused on two years ago as a Fulbright Scholar. Lex was a political artist who worked mostly in the medium of photo-montage in Germany and East Germany in the first half of the 20th century. Rachel spent six months with her family in Berlin in 2011, mostly doing research in archives and with primary sources.

In 2013, she was awarded a Gerda Henkel Stiftung research fellowship that allowed her to return to Berlin.

My push was to get a lot of writing done, she says. And I did that. I’m hoping to finish a draft soon. It will be an exhibition catalog in book form.

She needed to go to Berlin, Rachel says, because most of Lex’s work [can only be seen] in Berlin. She lived most of her life there. Fact-checking almost necessitated being there. Besides that, if we’d been here [at home], Tim [Buller ’96] would have been working and I would have had to juggle child care.

She saw the opportunity as an enriching one for her children—Daniel, 12, Daisy, 9, and Lucy, 7—as well.

We wanted to reinforce the sense of place we had from those six months in Berlin two years ago, Rachel says. Berlin is so different from Newton. We want them to feel comfortable navigating a different culture and language.

(Paul remembers that as being true for his children, Ryan ’02, Emma Janzen ’07 and Will ’14, on his first sabbatical in Europe, when they were still young enough to come along.)

Finally, this stint overseas was a time of professional development for me, Rachel says, especially fostering and solidifying connections with museum colleagues. Coming back a second time was proving I’m serious about this work. It felt more like friendship than something strictly professional.

The personal growth and development aspect can’t be beat, Paul agrees. I’ve traveled to Europe [the Netherlands and Germany] for previous sabbaticals. It’s such a clearing of consciousness. It’s refreshing. There are many things you don’t have to think about [when you’re away from home], even with the stress of being in another culture. 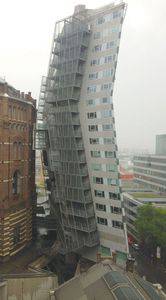 I thought Vienna would be exciting to get to know, he continues, to live there and soak in the culture and work on my German. We spent five days with a colleague from Maastricht, The Netherlands, and his wife. We saw the Freud Museum, Wittgenstein’s house [Paul also teaches philosophy]. And the music heritage is unbelievable—Haydn, Strauss, Mozart—a particular draw for Diane, a musician.

Both Paul and Rachel presented papers at conferences during their time abroad. Paul sent a proposal to the International Conference on Philosophy in Athens that was accepted, so he went to present his paper, On the philosophical possibilities of a constructive theology of self, at the end of May.

Rachel’s conference took her to Vienna, which was the one time the Bullers and Lewises crossed paths, meeting at the Prater, Vienna’s famous amusement park, where they enjoyed a meal together.

Rachel gave a talk on another topic dear to her though unrelated to her scholarly research on Alice Lex: Art and the Maternal: Strategies and Interventions, June 12 at the University of Applied Arts in Vienna.

Hers was the final lecture in a year-long interdisciplinary lecture series, which students could take for credit (Rachel had to submit exam questions along with her paper), called Kunst–Forschung–Geschlecht (Art–Research–Gender). She looked at the roots of exclusion of (most) motherhood from the art world, and even from much feminist art and presented some of the specific strategies and interventions employed by contemporary artists to bring heightened visibility to the often invisible aspects of maternity.

She also spoke at a conference in Erfurt, Germany, on German illustrated periodicals of the 1920s.

This sounds like a rather obscure topic, she says, but it was a very interdisciplinary weekend, with talks from scholars in art history, communication studies, history, literary studies, statistics and more. My talk there was on my Alice Lex research and writing. In particular, teaching the Schizophrenia and Mind class sensitized me to the conditions students are working under, Paul says. At the University of Vienna, many are taking five courses, working fulltime jobs and maintaining an apartment. They are not in a position to do the kind of work I expect from my students here at Bethel.

This made me more sensitive to the different lives our students have and how that affects what they can do and how—it’s not always related to how motivated or well-prepared they are or their work ethic.

Any time I travel, Rachel says, I see things at museums and think: ‘I should bring that into the classroom— show it to illustrate a point.’ Or maybe I see an exhibition for which the topic could make a good project.

There’s an awareness that students are coming from many different places. Travel is a reminder of that.