To find your path, follow your passion, commencement speaker says

Bethel College commencement speaker Daniel Hege ’87 admitted up front that the title of his address, “Find your own path,” sounded like a platitude. 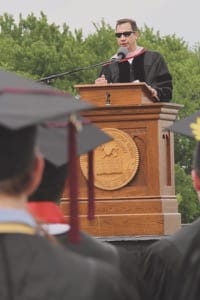 “Everyone has to find his or her own path, right? Why state the obvious?”

The point was that word “own.” “With all the expectations foisted on you from well-meaning people, and the dizzying amount of inputs you are confronted with, you may find yourself leading a life that is not yours. Try to realize this as soon as possible.”

Hege graduated from Bethel with degrees in music and history and earned a master’s degree in orchestra conducting from the University of Utah. He lives in Syracuse, New York, and makes regular trips to the center of the continent as music director of the Wichita Symphony Orchestra since 2009 and, as of the most recent season, principal guest conductor of the Tulsa Symphony.

Hege addressed the largest Bethel class in at least a decade—131 counting those in absentia—in a speech that included six points of instruction to the graduates on finding a path that was their own. First, he said, “Educate yourself.”

As liberal-arts graduates, “hopefully, you have been instructed on how to teach yourself, and how to think and process information. This is much more valuable than knowledge itself.”

Second, he advised graduates to “Create your own opportunities.” Expounding on a recurring theme of “finding and following your passion,” he told the students, “You can either allow a person or a situation to limit you, or you can let your passion take you beyond the artificial boundaries that are so often created.... You must create a perspective larger than that which is around you.”

Third, he said, “Eliminate barriers.” He told a story he has repeated many times, of how as a young man he was determined to attend a rehearsal by the legendary conductor Robert Shaw and the lengths he went to to reach that goal.

“What did I learn from this? If something is of great value to you, you will find a way to make it happen.”

His fourth point was “Make something of yourself.” He noted that we seldom remember for more than a year or two who’s “famous” in popular culture, but we usually don’t forget those people who have made a significant impact in our lives, such as a family member, friend or teacher. He urged the students to aspire to “be that kind of example for someone else.”

The fifth thing Hege offered was “Luck favors the prepared.”

“The luck or fortune I’m talking about has to do with cultivating your skills and becoming the best you can be at something through hard work, diligence and continuing to ask … how you can improve. If you’re doing absolutely everything in your power to develop yourself, you’ll necessarily increase your opportunities to give vent to your passion, and when the time is right, you will capitalize because you are ready.”

His final point was more of a question: “How one becomes what one is.” It often requires stepping into a place that is less than comfortable.

“Don’t always steer clear of conflict, but decipher what can help you gain perspective. This often comes from surrounding yourself with people who don’t necessarily think just like you.”

Hege concluded by noting that, when he was a Bethel student, he attended every Wichita Symphony Orchestra concert he could get to—and now he is the WSO’s music director.

“When I was at Bethel, I actually thought about the possibility that I could conduct such a group one day. As I look back, I have had abundant opportunities to conduct some of the greatest music ever written, and have worked with major orchestras around the world, and with wonderful artists, such as Yo-Yo Ma, Itzhak Perlman and many others.

“But it was never my goal, per se, to do these specific things. It was rather my goal to try to be the best I could be and use the passion that I had, and still have.

“No matter what path you choose in life, you owe it to yourself and to others to follow your passion—and by doing so, you will give others around you, and the world, something significant.”

Robert Milliman, vice president for academic affairs, introduced the Class of 2016 by citing a number of its characteristics. In this class, women outnumbered men almost 2:1, due in part to a record-high number of nursing graduates (nursing remains a female-dominated profession). At least five graduating seniors are following a long-standing Bethel tradition of taking voluntary service assignments, both overseas and within the United States, starting within the next several months. Countries represented in the Class of 2016 are Canada, China, Guatemala, Japan, Korea, Russia, Taiwan and Vietnam.

Eric Preheim came to Bethel from urban Georgia, following in the footsteps of parents and grandparents. Nonetheless, Bethel seemed “too expensive, too far from home, too small, too Mennonite,” and after one semester, he was ready to leave.

But he didn’t. He saw “a community that’s experienced the grace of God despite our many differences [and] God at work not only when times are good but when we pass through fires and walk through rivers,” echoing the baccalaureate Scripture from Isaiah 43.

Change came when “I quit telling my story so much and started listening to others’ stories,” Preheim said. “I stopped complaining about what wasn’t here and started appreciating what was.”