With softball being named a Kansas Collegiate Athletic Conference Team of Character in the sport, Bethel rounded out the year with four, including men’s basketball, women’s basketball and golf (for the second straight year). The Team of Character award is based largely on service. Among the softball team’s activity: They organized a food drive for the Harvey County Homeless Shelter; worked as a team on the fall Service Day to do some maintenance work on the softball field and the surrounding area; held a softball clinic for community girls; and supplied leaders for Bethel’s Fellowship of Christian Athletes chapter and for chapel services.

Rachel Epp Buller ’96, associate professor of visual art and design, earned one of only two Mary McMullan Grants that the National Art Education Foundation (NAEF) awarded in 2016. She will use the grant to fund the development of curriculum for a new course, Activism, Art and Design, which has been approved for spring 2017. The NAEF is affiliated with the National Art Education Association (NAEA), of which Epp Buller is a member.

Twelve of Bethel’s athletic teams earned an average GPA of 3.0 or higher according to the National Association of Intercollegiate Athletics.

As a young professor, Bethel’s Mallory Marsh, instructor of communication arts and director of forensics, has already made a significant impact on her students. Comments from some of those students helped earn her the Ralph P. Schrag ’37 Distinguished Teaching Award, which recognizes a Bethel faculty member who has made an outstanding contribution to teaching. Marsh just completed her third year at Bethel. For the past two, every member of her forensics squad has qualified to AFA-NIET, the national collegiate forensics tournament.

The John O. ’38 and Esther ’38 Schrag Helping Hand Award for 2016 went to Michelle Sheriff, custodian. She was nominated by junior Logan Dahl.

Thresher Awards went to four graduating seniors honored for making “outstanding and sustained contributions in their academic field.” Kathryn Layman, associate professor of chemistry and physics, presented an award to Bryce Hostetler in chemistry; Kip Wedel, assistant professor of history and peace studies, to Renae Stucky in history; and Karen Schlabaugh, professor of music, to Jill Siebert and Braden Unruh, both in music. 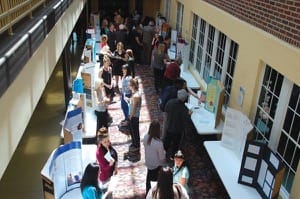 A display of student research set up in the Will Academic Center atrium this past spring as part of the URICA Symposium.

The URICA (Undergraduate Research, Internships and Creative Activity) Symposium each spring features student research, including the URICA Summer Research Grant recipients. Students awarded grants for 2016 are: Kelsey Peterson and Santiago Aragon, “Effects of the removal of invasive Tatarian honeysuckle (Lonicera tatarica) species along Sand Creek Trail”; Spencer Bailly, “Polish exclusion in the eastern provinces of the Kaiserreich”; Brittany Carter, “The effects on personality facets of Bethel students who faced Type I or Type II trauma during their childhood”; Azucena Gonzalez, “Behavioral effects of emotional priming on the Go/NoGo Task”; and Taylor Simmons, “Interspecies bonding: The reciprocal effects of pair bonds between green iguanas and their human caretakers on physiological and perceived stress.”