As the RN-to-BSN program goes live, it will not only fulfill department requirements but also help lead Bethel into the online-learning age. 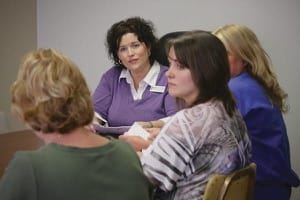 Sheri Weaver, a 1997 Bethel nursing graduate who also served as a clinical instructor in nursing, meets with a group of non-traditional students.

As Bethel takes its RN-to-BSN program from paper to reality, Director of Nursing Geri Tyrell ’07 also anticipates it will build a bridge to online education for the entire college.

The Kansas State Board of Nursing requires every accredited Bachelor of Science in Nursing (BSN) program in the state to have, at least on the books, a program that allows Associate Degree in Nursing (ADN, more commonly known as RN for “registered nurse”) nurses to complete requirements for the BSN. So Bethel has had such a program “on paper” for several years, Geri says, “but we’ve never enrolled any students.”

Since the program’s development, however, the nursing climate has changed, especially locally. The two major medical systems in Wichita, Via Christi and Wesley, are “working for magnet status,” says Geri. “To achieve that, 80 percent of your nursing staff has to have a BSN. It’s a huge recognition for the hospital, and has documented better patient outcomes and staff satisfaction. So the hospitals are going to ‘BSN-preferred’ for their nurses.” 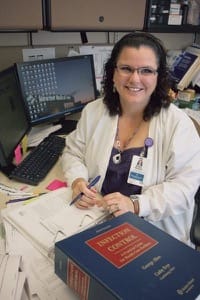 Sheri Weaver, a 1997 Bethel nursing graduate who also served as a clinical instructor in nursing, meets with a group of non-traditional students.

In addition, Salina Regional Medical Center is looking to move toward “BSN-preferred” as well. Administrators reached out to Bethel’s nursing department, and Geri has been in discussions about developing a Bethel-SRMC partnership, through which the hospital would completely cover tuition for any ADN nurse who enrolls in Bethel’s RN-to-BSN program.

In April, Geri gave a report to the Bethel College Board of Directors about jump-starting RN-to-BSN.

“When I stepped into this role [of director], not quite two years ago, one of the first tasks that I focused on was creating a strategic plan for the Department of Nursing,” she said then. “As the nursing department faculty worked to identify specific initiatives, the RN-to-BSN program became a high-priority item. Recent data published by the American Association of Colleges of Nursing found that 45 percent of employers require a BSN, while 79.6 percent are ‘BSN preferred.’ This is also true of our local market.

“With commitment from the faculty as well as the ongoing BSN push, I went back to the initial RN-to-BSN program proposed four years ago in order to find ways in which we could reinvigorate and relaunch the program. In doing so, I was able to reformulate the cost structure to reduce the overall delivery cost, thus allowing for an enrollment with a smaller required cohort for launch. Additionally, we looked at current research related to BSN articulation plans and made some changes to the delivery model as well as the curriculum.”

“We have removed some of the duplication of content and developed courses specifically related to technology, quality and safety, and interprofessional communication,” says Geri.

The entire faculty approved the revised curriculum this past spring. It is built using four-week, fully online courses that allow completion in one calendar year.

“We believe we have developed a distinct and attractive educational program that meets the needs of current associate-degree nurses looking to continue their education,” Geri says.

The program as reconfigured needs a cohort of only three to be cost-neutral. Eleven individuals have expressed interest through the connection with SRMC, so Geri is confident of making the quota by the time classes start (with the Bethel school year) Aug. 15.

The RN-to-BSN program will use Bethel’s own learning management system, ThresherConnect. Sarah Masem, assistant professor of nursing, and Geri have developed the courses and believe in ThresherConnect’s ability to deliver, since they already offer the department’s Pharmacology course online.

“I believe this is a sustainable, financially responsible model for bridging to online education for the whole college,” Geri says.”

“For the ADN-to-BSN nurse, it’s about filling in the gaps,” she points out. “They are already licensed and experienced. They need to learn about roles and responsibilities related to research and evidence-based practice, about technology, and quality control. Writing will be a big emphasis.”

She continues, “It’s about facilitating the learner. These students have to come in engaged, self-motivated and able to be self-directed.”

Or, as she told the board: “I am hopeful that this program will have a systemic effect. I believe [it] will allow us to strategically, with fiscal responsibility, enter the online education market, thus beginning the process of expanding the Bethel tradition beyond the physical space of Bethel College.”