The search to create something useful

Entrepreneurial thinking bears a strong resemblance to the traits that define a liberal-arts education. 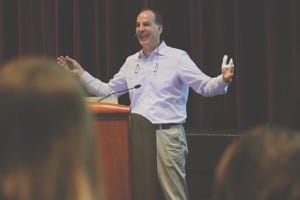 Gary Schoeniger of the Entrepreneurial Learning Initiative gives the keynote at the Ice House Entrepreneurship Program Training held at Bethel in June.

The answer: “An individual who is resilient; self-directed; can think critically and creatively; asks good questions; is able to solve problems in ambiguous and complex circumstances without someone telling them what to do.”

The question: “What is a liberal-arts college graduate?”—right? Well, yes. But also: “What is an entrepreneur?”

Seventeen people from Newton-area businesses and nonprofit organizations came together on the Bethel campus in early June to wrestle with the implications of and potential in “redefining entrepreneurship,” as Gary Schoeniger puts it.

Schoeniger has been described as “a thought leader in the field of entrepreneurial mindset education.” He founded the Entrepreneurial Learning Initiative (ELI) and was a key developer of the Ice House Entrepreneurship Program, through which he and ELI staff have been “redefining entrepreneurship education in classrooms and communities around the world,” according to the Ewing Marion Kauffman Foundation of Kansas City.

Schoeniger and his colleague Joanie Weber led a 2½-day Ice House training at Bethel June 1-3, as the first initiative in the college’s long-range effort to develop a center for nonprofit leadership and innovation.

Put plainly, such a center can eventually be an added revenue stream for Bethel. But on a broader scale, the kind of thinking that ELI and the Ice House curriculum tout is exactly what a place like Bethel wants to be disseminating to the broader community, says President Perry D. White, who went through the Ice House training.

As he pointed out at the Alumni Banquet, which took place right after the training ended, the word “entrepreneur” comes from the French, “entre” and “prendre”—literally, “to undertake.”

“We’ve abdicated this word to business,” White said, “but in fact, it’s so well connected to the liberal arts.

“Identify a problem. Develop a solution. That’s what an entrepreneur does.”

Or, as Schoeniger himself put it in his opening keynote address, “The entrepreneur’s goal is: To use my God-given talent and abilities to create something useful for my fellow human beings.” It might be an actual product that you market and sell, but it could just as likely be something less tangible, he said.

“It’s about searching for the connection, for that useful thing. The entrepreneur is a detective rather than a gambler or a fortune-teller. The search requires empathy, understanding the needs of others—sometimes better than by themselves.” 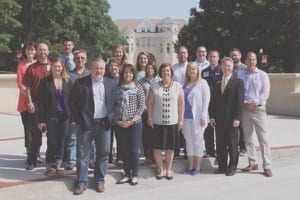 Participants in the Ice House Entrepreneurship Program training held at Bethel June 1-3 took a group photo on the entrance plaza across the Green from the Ad Building. Bethel-related participants, in addition to President Perry White, were Sarah Kovalesky, director of residence life, and Patty Meier, who owns and operates Mojo’s, located in Schultz Student Center, along with Owen Kindall ’07, a loan officer at First Bank of Newton, and Jerol Schrag ’02, chief financial officer for Bluestem Communities in North Newton and Hesston.

“Resilience; commitment; teamwork; communication; collaboration; networking; critical thinking; problem solving; creativity; adaptation; experimentation; curiosity; inquiry; observation—these are all necessary to the search process, and they are all things that every young person needs to survive in the 21st century.

“Employers want to hire people who think entrepreneurially,” Schoeniger said in his closing comments. “The Ice House training is meant to help people achieve the ‘general education outcomes’ such as [those mentioned above].”

Bethel’s push to develop a center for nonprofit leadership and innovation has as its goal “giving nonprofit leaders the tools for creating and maintaining sustainable organizations,” White said. “Innovation circles around sustainability.

“This is much more focused on organizations and individuals than on businesses,” he continued. “It defines success much differently than in terms of making money or growing a business.”

The training at Bethel developed in conjunction with Harvey County Economic Development (HCED). Conrade Insurance, Midland National Bank and First Bank, all of Newton, and the Halstead Bank signed on as sponsors.

They, along with Bethel, HCED and the Newton Chamber of Commerce, paid the workshop fees that allowed 17 people—representing the sponsoring organizations, Hesston College, nonprofit health-care-related organizations, one city government and one small business—to attend the Ice House training.

Sarah Kovalesky, coordinator of residence life, started the training uncertain why she had been asked to go, because to her, “entrepreneur” meant “business person,” something she says she is not. But she discovered the concepts were useful for her, too.

“What I took away from the Ice House was a new way of thinking, and that there are always solutions to the problems we face,” she said. “With my student staff, I want to work on new and creative ways to do things in the residence halls [and] look at ways to incorporate the ideas and concepts from Ice House into Haury Hall [all-freshman residence] to better prepare our students in and out of the classroom.”

Or as Schoeniger said in his opening: “This curriculum represents more than an academic discipline, or the development of a small business—it’s a mindset, a way of thinking and acting that can empower anyone to succeed.”

“You start to see the connection to the liberal arts,” White said. “The onus is on the organization—in our case, the college­—to facilitate entrepreneurial thinking, to get to the ‘pivot point’ that enables it to avoid obsolescence.

“We’re all looking for answers out there,” Schoeniger said, “when the answer’s right here.”