How to drum up school spirit

The newest addition to Bethel’s athletics department is an award-winning teacher who uses percussion to get students excited about music and sports. 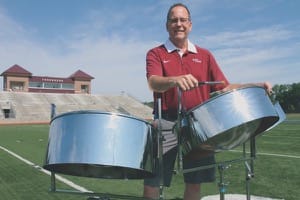 Brad Shores shows off some of his steel-drum chops with Thresher Stadium as the backdrop.

Shores had to go to Arizona to discover them. After getting a degree in music at Fort Hays State University in Hays—where he majored in percussion, was involved in the drum and bugle corps and taught drumline—Shores went to Phoenix for his first teaching job, beginners’ violin.

“I first saw steel drums [there] and knew I had to do this,” he says. And he’s been figuring out non-traditional things to do with percussion ever since. 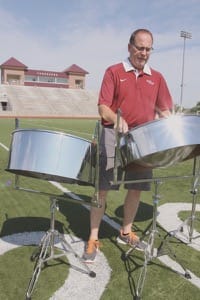 Brad Shores and his steel drums

Eventually, Shores and his late wife, Linda, and their three children formed a family steel-drum band, Tropical Shores. Shores returned to Kansas to teach at Nickerson High School where, among other things, he founded Stinkin’ Garbage, a trash-can band (percussionists who play trash cans and can lids).

When he moved on to Haven (Kansas) High School, Shores developed the Trash Cats, as well as an 18-piece steel-drum band, the only one in the state.

Sydney Littlestar, a 2016 Haven High School graduate who plans to attend Bethel starting this fall, began playing steel drums under Shores as a sophomore. He had been her music teacher since 6th grade.

“Mr. Shores is like family,” she says. “He went through a rough time [when his wife, who also taught at Haven, was diagnosed with and eventually died of cancer] and we were all there to support him.

“He’s a real role model for me. He is successful in his career and he really connects with students while also juggling everything else.”

Littlestar is also a clarinetist but had a wonderful time with the steel drums in high school, she says—something she looks forward to continuing.

“Mr. Shores wrote all our arrangements. Every year, we’d take a ‘steel-drum trip.’ Once we went to Kansas City, where one of his daughters lives, and played his arrangements of Disney tunes [such as ‘Under the Sea’ and ‘Kiss the Girl’ from The Little Mermaid] in a bunch of grade schools.” 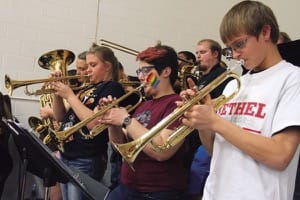 There are no marching bands in the 12-member Kansas Collegiate Athletic Conference that includes Bethel. Only a small handful of the schools even have a pep band. And there’s not a single scramble band, sometimes called a scatter band, to be found at any college or university in the state.

“In my senior year at Haven,” Littlestar says, “we used the steel-drum band with the marching band. We would stand up front to play. … [People] were really amazed by the sound.”

Shores will also work at building a pep band. Bethel Thresher fans and athletes got a taste of what that will be like when Bethel played Tabor College on Senior Night, Feb. 20.

Shores brought his pep band from Haven High School to Thresher Gym. One of his former students, freshman Kylee Addis, sent an e-mail inviting any Bethel student who wanted to play with the pep band to show up.

Senior Abby Phillips decided to go for it. She had played trumpet in her own high school pep band. “I miss it,” she says.

“I like the feel of it. It’s energetic—gets you into the game.” 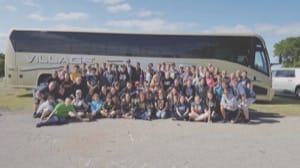 Brad Shores’ last activity with his Haven High School band before he took a new position at Bethel College was a trip to Oklahoma City for a band festival. The band is posed here with the trophies they won at that festival.

Before he took the job at Bethel, head men’s basketball coach Tony Hoops ’05 coached boys’ basketball at Halstead High School. “We played at Haven numerous times,” he says. “Brad created such a great environment, our players looked forward to playing there.”

The night of the Tabor game, a similar thing happened, Hoops says.

“It was more of a ‘traditional basketball’ feel. When I think of Kansas basketball, I think of individuals performing at their highest level, whether athletes or musicians.

“I thought Bethel did it right that night. Even though we lost, people walked out proud to be alumni and wanting to come back. When students left, they were saying, ‘I had a great time.’ That was one of the best Saturday-night activities we could ever have for students, and for free. This helps us make what we already have better.”

Shores’ vision for athletic band at Bethel (following a relatively new model, it’s housed with the athletic, rather than the music, department) is based on “outside-the-box thinking and using non-traditional instruments”—like the trash cans.

“Trash cans are like off-season training for drummers. It’s technically difficult but they don’t care, because they’re having so much fun. The crowds love it and that motivates [students].”

“Anything that gets them interested in music, I’m for it,” he says.

At Bethel, Shores plans to develop a drumline, he says. “That’s the hottest thing going. It [builds] spirit and momentum. Anywhere there’s a group activity on campus, we can be there.

“For indoors, it’s pep band. I can’t imagine games without it. It’s a game changer—our job is to make [the home court] a tough place to win a game.”

Since Linda Shores lost her battle with cancer two years ago, Shores has been feeling the need for a change, he says, even though the Haven schools community has been a lifesaver for him.

“If you have to go through this, you want to have that kind of support. I hate to leave it, but this was an answer to prayer for a new direction. I’m excited about it” although, he admits, “there will be a learning curve in how to be a college teacher.”

“Brad isn’t limited by creativity. This gives our program, and our college, something unique.”

“I have no idea what we’ll be getting into with this new band,” says Littlestar, “but I’m excited to be part of something new.”