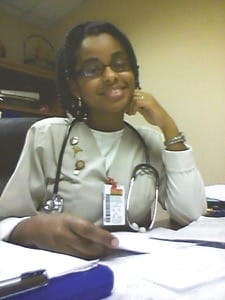 With nine years of experience—as a nurse supervisor for a skilled nursing and rehab facility and a hospital staff nurse in a medical/surgical setting—Jacqui-Ann Doig values the skills she learned at Bethel College.

Her journey to Bethel was orchestrated by a visiting family on a mission trip to Jamaica who became friends with Jacqui-Ann’s parents. Some years later, the family came back and offered Jacqui-Ann an opportunity to attend a college of her choosing in Kansas. After much research, she found on the Bethel website what she was looking for: a Christian college that offered a four-year nursing degree and international student assistance.

Jacqui-Ann says she encounters many challenges in her positions and she praises Bethel for offering unique courses on conflict resolution. Bethel also gave her on-the-job experience: in addition to clinicals, simulators provided hands-on learning.

She also recalls that convocation provided a broad education on a wide variety of topics. “Professors were well-traveled, learned and passionate,” Jacqui-Ann says, “and offered their knowledge in an intimate setting.”

While at Bethel, Jacqui-Ann was a member of the International Student Club, where she experienced an “exchange” between U.S. culture and those of other international students. As an international student herself, she was exempt from Bethel’s cross-cultural learning requirement, but still appreciates the opportunities she had, especially during interterm, to learn more about the global society with which she now works daily.

The fact that Bethel was a Christian college was important to Jacqui-Ann’s education. She says being allowed to exercise her faith in Christ was important then, and still is in her work today. “The climate in health care offers ample opportunity to bring light and love to my work,” she says.

Jacqui-Ann also believes in giving back to Bethel. Her experience here made a difference in her life and she knows the impact it is having for current students.

“Bethel has a high reputation for scholastic achievement,” she says. “As long as I am able, I will continue to support my alma mater.”